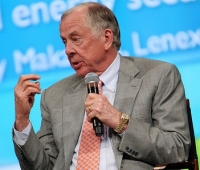 Pickens will connect the farm to a transmission line that is expected to be completed in early 2013. In 2007, Mesa announced plans for a 4 GW Pampa wind farm in the Texas panhandle. Two years later, the company put the project on hold due to a lack of adequate power lines. The company will utilize 233, 1.6 MW GE (NYSE: GE) wind turbines purchased through a contract in connection to the earlier plan. Mesa in 2008 agreed to buy 667 1.5-MW GE turbines for the Pampa project and halved the order in 2010. Mesa said later that year it would use some of the 333 turbines at projects in Minnesota and Canada.

Mesa is seeking a buyer for the project’s power. Stephens Bor-Lynn is the company’s only Texas project.

Texas has more than 10,330 MW of installed wind capacity, according to the American Wind Energy Association, the most of any state.

This article was originally published on Power Engineering and was republished with permission.