More
Home Wind Power Offshore One if by Land, Two if by Sea — U.S. Offshore Wind... 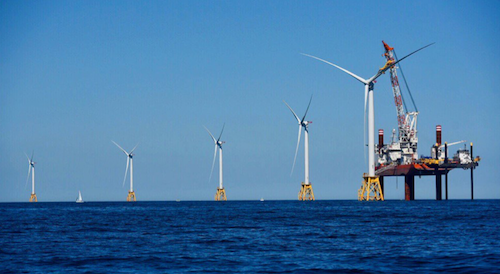 2016 will be remembered as “the year U.S. offshore wind arrived,” as Block Island Wind Farm, a 5-turbine 30 MW offshore-wind project, arose off Rhode Island’s coast this summer and will soon power the grid. Relatively modest in scale, this wind farm’s christening carried significance greater than its size. The first “steel in the water” for U.S. offshore wind, it was proof of the promise this abundant home-grown renewable resource holds to light boardwalks and boardrooms up and down the Eastern seaboard.

Whether Block Island marks a tipping point, or more tentative toe in the water for America’s clean-energy future, depends on how quickly states empower the marketplace, coordinating among themselves and federal agencies to remove obstacles to entry and competition, enabling the U.S. offshore-wind industry to seize the opportunity.

Indeed, more important to the industry than “steel in the water” are larger utility-scale breakthroughs in two states — Massachusetts and New York — which have taken a lead in the high-stakes, multi-state renewable-energy revolution that will determine who wins the race to tap offshore wind.

What’s clear is the size of the prize. Scientists confirm there’s enough wind off the coast of our most-populous, power-hungry cities — Boston, New York, Philadelphia, Baltimore, Los Angeles, Washington, DC — to supply all the nation’s electricity, twice over. The East coast’s offshore-wind potential — 1,001 GW — could power the entire Atlantic seaboard. 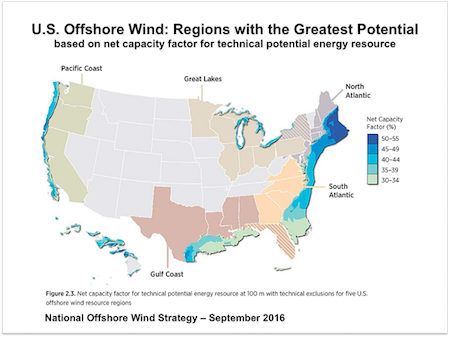 Key to harnessing this vast resource is a commitment to scale to unleash what the market does best — drive down costs for U.S. offshore wind on a trajectory seen in Europe, where 11.5 GW of offshore wind powers 7 million homes.

Land-based wind power has expanded rapidly in the U.S. — #1 new power source in 2015 — with 75 GW total capacity and cost-competitive in Great Plains states with all energy sources.

On U.S. coastlines, especially the Northeast, the best wind blows offshore, strong and steady at peak-demand hours, with electric-generation potential many times greater than on-land wind or rooftop solar.

Most important, offshore wind can be delivered to U.S. ratepayers at competitive prices, based on technology advances and economies driven by the market and commitments to scale. That’s the key finding of a study released last March for the Special Initiative on Offshore Wind, analyzing trends and projecting offshore-wind energy costs in Massachusetts from 2020-2030. 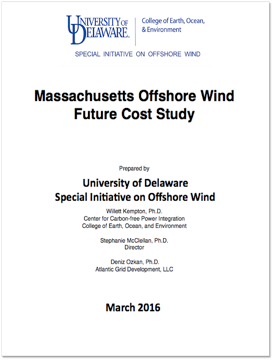 The study found that committing to develop offshore wind at scale — 2 GW — along with industry advances would lower projected costs over time as much as 55 percent, to a competitive 10.8¢/kWh within a decade, based on levelized cost of energy over the project’s life.

For U.S. offshore wind, the study offered a clear road map to reduce costs. Using sound analysis of U.S. cost drivers, benchmarked against real trends in Europe, it gave policy makers a recommendation they needed to act: Set a firm commitment on scale and enlist a competitive market in the U.S. to do its job, as it did in Europe.

In Massachusetts, which has the largest U.S. offshore-wind resource, the legislature on July 31 passed and governor signed an energy bill ordering a 10-year offshore-wind build-out of 1.6 GW. The initiative is practical and realistic, empowering the market with defined scale and a set time. Notably, the size of Massachusetts’ commitment, along with other states, exceeds the 2 GW threshold to drive competitive prices for electricity customers.

On Aug. 1, New York launched its Clean Energy Standard, committing to source 50 percent of its electricity from renewables by 2030, followed by its Blueprint to ensure offshore wind is a key contributor. New York took a page from the Dutch — who’ve achieved among the lowest offshore-wind costs — committing to ensure suitable sites and reduce risk with revenue/regulatory pairing for developers.

An Offshore Wind Master Plan will make New York’s commitment clear to create conditions lowering costs, while accommodating other human and wildlife ocean uses. The process promises to be thorough, motivated to reach the finish line by an awaiting market of 25 million electricity consumers in the New York City area. When completed, New York could usher in the most-competitive projects in America — maybe even world. 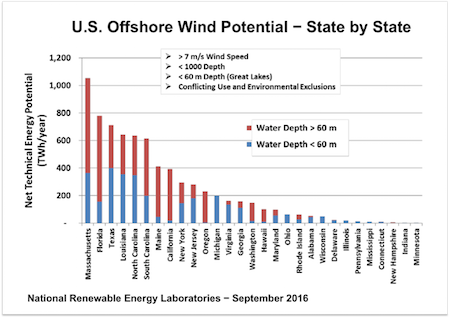 If 2016 is the year U.S. offshore wind arrived, 2017 will determine if it thrives. The challenge ahead is converting this breakthrough into a new synergy, coordinated between state and federal levels.

Over the past decade, offshore wind excelled in Europe but lagged in America, slowed by the puzzle of navigating federal-state policy and demonstrating long-term price viability in the highly-competitive U.S. market.

That outlook has changed, for the better. Offshore wind has proven it can be cost-competitive. It can demonstrate this off America’s shores with smart state policy and federal support on permitting, data and R&D.

How Low Can It Go, for U.S. Ratepayers 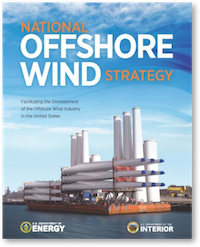 Crucial will be the next U.S. administration’s commitment to the new National Offshore Wind Strategy, which targets 86 GW for U.S. offshore wind by 2050. Just as vital are Massachusetts’ and New York’s planning and policy implementation, which will drive more immediate offshore-wind investment from the supply chain.

The table is set — 2017 could eclipse 2016 as a U.S. offshore-wind milestone. Globally, the industry put economic questions to rest, with European cost-reduction exceeding goals — in size and speed.

The question has changed from “can we afford offshore wind?” to “how low can it go?” Recent projects in the Netherlands are 60 percent cheaper than what industry experts estimated for last year — with total costs now under 9¢/kWh.

Record-low, market-beating offshore-wind prices were unimaginable to U.S. policymakers two years ago. Yet it’s a reality in Europe today. We can bring that reality to U.S. ratepayers, if we seize the opportunity. The road map is clear.