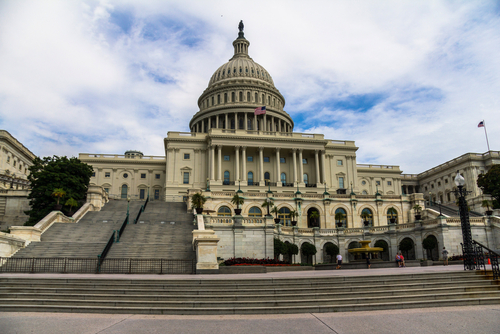 It’s up to Republicans to decide whether they’ll agree to environmental measures sought by Democrats in exchange for lifting the export ban, Reid of Nevada said on the Senate floor Tuesday.

“If Republicans think reducing our carbon emissions and encouraging the use of renewable energy is an unacceptable price to pay, we can move the rest of the package without the oil export ban,” Reid said. “It’s decision time.”

House Speaker Paul Ryan said congressional leaders expect to unveil a $1.1 trillion government spending bill later Tuesday for a possible vote on Thursday. Current government funding ends at the end of the day Wednesday, and the speaker said a short-term extension will be needed to keep the government operating.

“I think we’ve been pretty clear we’re not going to have a shutdown,” Ryan of Wisconsin said during a Politico event in Washington.

Congressional negotiators have been working on the spending bill and an accompanying package of as much as $750 billion in business and low-income worker tax breaks. A resolution has been delayed by disagreements over a variety of policy changes sought by Republicans, including lifting the oil export ban.

“That doesn’t mean negotiators have surmounted every obstacle, but it does signal a sign of forward momentum,” McConnell said on the Senate floor.

The deal being discussed would lift longstanding trade restrictions on U.S. crude oil exports in exchange for extending renewable energy tax credits and allowing the U.S. to pay into an international fund to help developing countries cope with climate change, according to three energy industry lobbyists familiar with the negotiations.

U.S. oil producers, including Continental Resources Inc., Pioneer Natural Resources Co. and ConocoPhillips, have been pressing for an end to the trade restrictions that block exports of most raw, unprocessed crude but don’t restrict foreign sales of gasoline, diesel and other refined petroleum products.

Lawmakers are near agreement on a plan that would extend a production tax credit used by wind power developers for five years, the lobbyists said. A similar five-year extension would be allowed for the solar investment tax credit, which covers 30 percent of the qualified costs associated with those projects, they said. The 50-year-old Land and Water Conservation Fund, which helps pay for land acquisitions and expired in September, also would get a two-year extension.

Congress also would stand aside and allow the Obama administration to dedicate $3 billion to the global climate fund by reprogramming federal dollars, the lobbyists said.

Leaders are also considering an expansion of a domestic manufacturing tax deduction for refiners that may be harmed by oil exports — possibly increasing it by 3 percentage points and allowing those facilities to count up to 55 percent of their transportation costs toward the deduction, the lobbyists said.

Kevin Book, managing director of ClearView Energy Partners, told clients in a research note Tuesday that he anticipates the final bargain will require “Republican agreement to drop most — but probably not all — of the policy riders that would have constrained Obama administration environmental rules.”