Here’s a look at some new turbine product developments.

Samsung of Korea had a prominent display at the show with a large booth dedicated to the 7-MW S7.0-171 offshore turbine, a prototype of which was recently installed in the UK. The behemoth is designed for 25-year operating life and features the world’s longest 83.5-metre blades offering a record 171.2-metre rotor diameter. The compact medium-speed drivetrain comprises a two-stage planetary gearbox designed and built by UK firm David Brown. A rather unusual design feature is that the gearbox has been integrated inside the large-diameter hollow main shaft, which in turn is supported by two rotor bearings.

The medium-voltage permanent magnet generator (PMG) operates at 3.3kV, and all power electronics including power cabinets, power-electronic converter, MV-transformer and switchgear are located in the tower base. According a Samsung spokesperson the turbine can achieve 73 percent capacity factor at high-wind sites, meaning that under the right conditions, on an annual basis, 63 percent of the time the turbine is producing power at more than 80 percent of its rated power, qualifying it as a “true power plant.” The company expects to receive certification in 2014.

Power engineering specialist ABB introduced a new 7-MW high-speed permanent magnet generator in Frankfurt. The generators come available in low voltage (690V) and medium-voltage (3.3kV, and either water or air-cooled. All ABB high-speed generators for wind turbines (DFIG, PMG and induction-type) are based on a standard modular platform principle and feature an adaptable turbine interface. The modularity also allows changing from DFIG to PMG and vice versa depending upon customer preferences. Developing a new high-speed generator in the 7-MW high-end capacity range could come a bit as a surprise, because most new super-class geared turbine developments now seem to focus at medium-speed solutions. 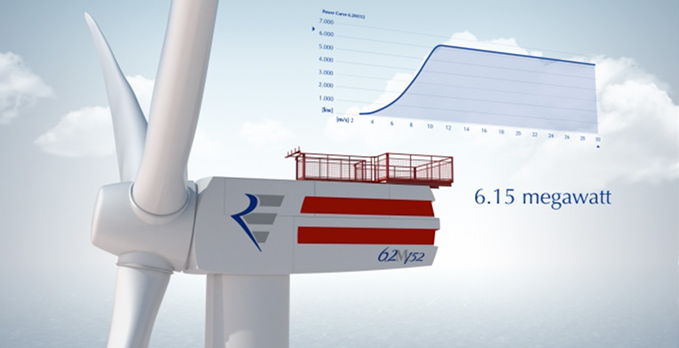 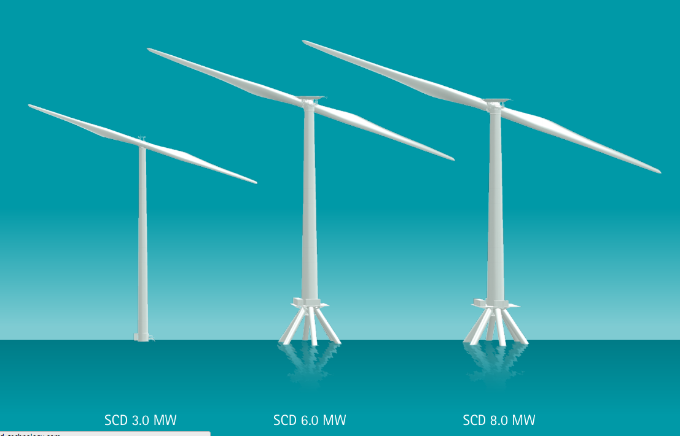 German engineering consultancy aerodyn based in Frankfurt introduced an innovative two-bladed 8-MW SCD 8.0 down-wind offshore turbine with 168-metre rotor diameter. (SCD stands for Super Compact Drive.) The SCD 8.0 incorporates a medium-speed drivetrain with a single rotor bearing flanged to an in-house developed planetary gearbox plus PMG. These main components in turn are flanged directly to a cast main carrier, and there is no separate nacelle cover.

One special product feature of the SCD 8.0 is a helicopter-landing platform integrated in the nacelle upper part, whereby actual landings are enabled only after locking the rotor in horizontal position. (See image, left, for an example of the 3-, 6-, and 8-MW products.)

Two-bladed turbines are new in the offshore market, but do offer specific advantages including easier deck stowage of fully assembled turbine heads (nacelle + rotor) plus time and cost-saving single-hoist installation. The SCD 8.0 is aimed at the European offshore market, and aerodyn owner/director Sönke Siegfriedsen firmly believes that a favorable 395-tonne head mass makes the turbine well-suited for both seabed-fixed and floating foundations solutions. 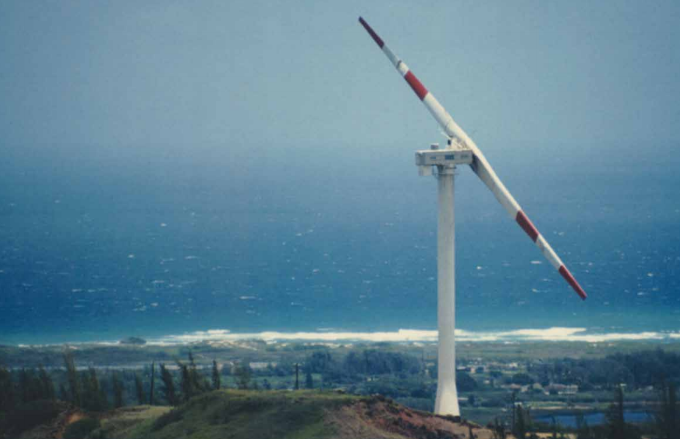 SCD 8.0 is a further development and optimization of the 6-MW SCD 6.0, an IEC class IIB turbine featuring 140-metre rotor diameter. Aerodyn’s Chinese partner and licensee Ming Yang is currently finishing construction of the SCD 6.0 prototype, with installation planned for early 2014. The SCD 6.0 was specifically developed for the hurricane-prone coastal stretch between Shanghai and Hong Kong, which, according aerodyne, is one of the world’s largest future offshore wind markets. Ming Yang already operates several 3-MW two-bladed onshore upwind SCD 3.0 turbines with 110-metre rotor diameter for IEC class IIIA locations. (See image, right, for an example of an onshore two-bladed turbine.)

SCD was first presented at the 2007 Husum wind industry fair and was one of the world’s first medium-speed turbine designs.

SCD technology is built upon aerodyn’s (design) experiences with its patented 5-MW hybrid-type offshore turbine called Multibrid M5000. This groundbreaking turbine was developed and patented during 1996/7 and is comprised of a single rotor bearing and a highly compact fully enclosed cast chassis that incorporates a single-stage planetary gearbox and permanent magnet generator. 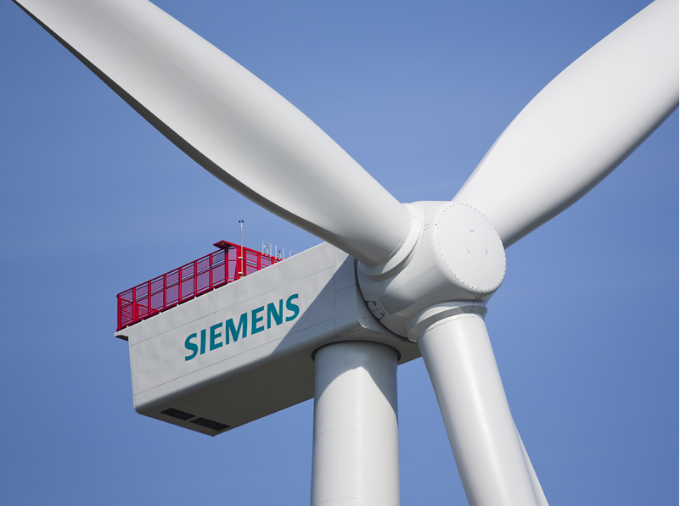 Siemens Energy finally presented its new 4-MW and 6-MW offshore turbines in Frankfurt, including a new 4-MW SWT-4.0-120 model version with 120-metre rotor diameter. The company said that it wants to reduce lifecycle-based cost of energy (CoE, which equals turbine cost/kWh/20-25y) for both the 6-MW direct drive and 4-MW geared turbine models by up to 40 percent compared to today’s levels.