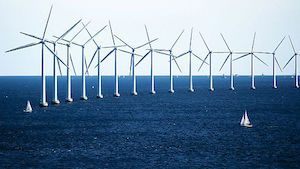 The Danish utility DONG Energy A/S was one of the low-bid companies in that recent auction which, for DONG, secured power from its “Hornsea Project Two (HP2),” 89 km (55 miles) off the Yorkshire coast, in the North Sea. HP1 is under construction, and HP3 is being developed.

A 50 percent drop in the cost of any commodity attracts attention, and questions. Does the Hornsea project represent a kind of tipping-point, an indicator that offshore wind projects elsewhere will similarly benefit from falling prices?

In an announcement, DONG lists the favorable “cost-drivers” for HP2.

“The ideal size of an offshore wind farm is 800-1,500 MW,” DONG wrote in its Hornsea Project announcement. In contrast, in the U.S., the only off-shore wind farm in Rhode Island is 30 MW. Long Island’s planned South Fork Wind Farm is supposed to be 90 MW.

Kate Freeman, PhD, is a modelling and analysis expert with BVG Associates, a renewable energy company focusing on wind, wave and tidal energy systems, with offices in the U.K. and the U.S.

Freeman believes that recent favorable offshore wind trends will benefit the U.S.; for example, efficiencies in standardization and installation. She noted the small scale of U.S. projects, however, saying that “the U.S. is less likely to benefit as significantly.” Still, she said that “U.S. project costs are trending towards Europe’s low costs” and that Europe’s experience will benefit U.S. projects.