As I discussed in my article on investing in offshore wind power, Nstar (NYSE:NST) recently agreed to buy 27.5 percent of Cape Wind’s 420-MW planned output. Since National Grid (NYSE:NGG) has had a power purchase agreement (PPA) to buy 50 percent of the farm’s output since 2010, Cape Wind now has enough capacity contracted to raise money for construction.

The Nstar PPA has yet to be negotiated, but National Grid specifies prices starting at start at 18.7 cents per kWh, and increasing 3.5 percent annually. That’s quite expensive, when you consider that the 2010 average wholesale price of power on the New England ISO was 4.5 cents per kWh.

Looking at those numbers, you would expect that when Cape Wind comes online, National Grid and Nstar customers will be seeing rate increases. But it’s not that simple.

Electricity prices on the New England ISO are set in hourly auctions, with each generator bidding the price at which they would be willing to generate power. All generators receive a payment equal to the benchmark price, which is the marginal cost of production for the most expensive generator needed to meet demand.

How much lower? A 2010 Study by Charles River Associates [pdf] found that Cape Wind would lower prices on the New England wholesale market by 0.122 cents on average. Since Cape Wind itself would be producing about 1 percent of all power on the New England market, the extra 14 cents per kWh on that power would be offset by a savings of .122 cents per kWh on all other power. By my calculations, the combination of price suppression and the increased direct price of power from Cape Wind, the net effect on the average price of power in New England of Cape Wind would be an increase of only 0.02 (one fiftieth) of a cent, assuming the Charles River Associates study is accurate. That’s almost certainly less than the likely error in any such calculation, meaning that the extra cost for Cape Wind would be effectively zero. Put another way, even if customers pay a 12.2 cent per kWh premium for power from Cape Wind, the net effect on utility bills would be zero because of price suppression.

The December 2010 New England Wind Integration Study [pdf] (NEWIS), reached a similar result, finding that if 20 percent of the New England ISO’s energy were supplied by offshore wind, it would reduce the average annual Locational Marginal Price for power by $9 per MWh, or 0.9 cents per kWh. This effect alone would justify a 4.5 cent per kWh price premium for offshore wind up to a 20 percent penetration. Although 4.5 per kWh cents is a much lower premium than the 12.2 cents per kWh that the 1 percent penetration of Cape Wind would justify, these two results are similar because the first offshore wind farms built would have larger effects on the power market for each GW added.

One of the reasons offshore would do so much to reduce wholesale electricity prices is that it tends to be available when demand on the New England Grid peaks — we’re used to onshore wind being poorly correlated with load. In the Great Plains, where most U.S. wind has been built, the wind blows strongest at night and in the winter, and is often nearly still on the hottest summer days when demand peaks. In contrast, offshore wind sites in New England have much higher summer capacity factors, according to NEWIS. 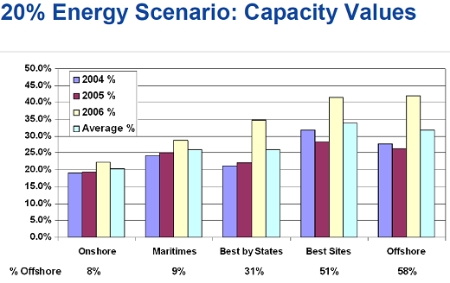 While it might seem foolish to pay over 18 cents per kWh for new offshore wind generation today, wind power is not nearly as expensive as it seems. Because of price suppression, the extra cost to New England customers of Cape Wind is likely to only be a fraction of a cent per kWh on their electricity bills. As the offshore wind industry in the Northeast develops, the cost of developing offshore wind farms is also likely to decrease, since current prices are predicated on expertise and equipment imported from Europe and the offshore oil industry in the Gulf of Mexico.

According to several speakers at Offshore Wind Power USA in Boston last week, the surest way to develop a local offshore wind industry and gain the benefits of lower offshore wind prices, economic development, and lower pollution and carbon emissions, is to give industry certainty that there will be consistent building of offshore farms for several years to come.

Will it be worth it? If we continue to rely on cheap fossil powered electricity generation in the Northeast, we’re likely to end up like the guy who buys the cheapest furniture he can find, only to have it break within a few months, leaving himself still needing furniture and having a pile of trash to get rid of. Not only will we eventually have to buy renewable power like offshore wind, we’ll have more pollution caused by mining, drilling, and burning fossil fuels which we’ll have to clean up. Anyone worried about how wind turbines might look cluttering up our coastal waters might pause to consider what is in our water now: the mercury we worry about in seafood all comes from burning coal. Just because something is out of sight does not mean it’s not causing problems.

The British have a phrase for buying something cheap only to spend more money in the end: “Penny wise, Pound foolish.” Perhaps that’s why the British are so far ahead of us in developing offshore wind.