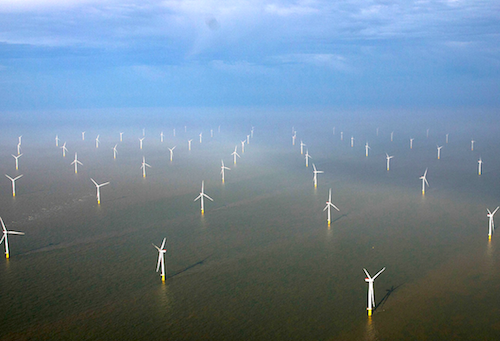 German’s electricity grid regulator approved bids to build what will be the first offshore wind farms that depend entirely on market prices instead of government support and subsidy.

The decision by Bundesnetzagentur, or BNetzA, grants power purchase agreements for 1,490 MW of wind farms to be built in the North Sea. Developers promised to supply power from the facilities at a record-low weighted average of 4.40 euros ($4.67) a megawatt-hour, less than a tenth of the previous offshore wind deal, the regulator said Thursday.

The bids were “far below any expectations,” said BNetzA President Jochen Homann. They’re well beneath the market price for power in Germany, which has fallen 3.8 percent this year to 30.10 euros a megawatt-hour, according to broker data compiled by Bloomberg.

Developers led by Energie Baden-Wuerttemberg AG and Dong Energy A/S are betting they can sell the electricity they produce from the wind farms at a profit even before considering government support. At least one bidder, EnBW, confirmed offering electricity at zero additional cost to the grid, suggesting it’s either confident about the strength of wholesale prices or that it’s already lined up a buyer for the power.

“This is a big warning shot across the bow for other renewables and really great news for German rate payers,” said David Hostert, a wind-energy analyst at Bloomberg New Energy Finance in London. “Three of the four winning bids are practically merchant-risk projects that will mostly rely on the wholesale power market.”

The auction is a new feature of Germany’s renewable energy market, which started booming more than a decade ago when the government offered feed-in tariffs granting a fixed power price for all developers that qualified. That led to runaway installations of wind and solar farms. The government since restructured its support mechanisms as an auction where developers bid for power purchase agreements, making them compete against each other to supply at the cheapest rate possible.

Developers must bid through the auction to get grid access for their projects. Hostert said that encourages bids of practically nothing from those confident they can supply near or below the expected the market price, a move necessary to ensure they secure authority to execute on their plan. Bids to supply for zero also protect developers from negative power prices that have cropped up recently at times when Germany’s wind and solar farms are all operating at capacity.

The biggest wining project is EnBW’s 900-MW He Dreiht facility with a bid of zero euros a megawatt-hour, the Karlsruhe, Germany-based utility said in a statement. That could put pressure on bidders in subsequent rounds to keep offering lower prices.

“Subsidy-free offshore wind!” Hostert said. “This is a moon-landing moment.”

EnBW in a statement said it plans to commission the wind farm in 2025 and “will benefit from the rapid progress of technology development.”

“The bid’s underlying power price assumptions are moderate,” Dirk Guesewell, who heads the utility’s generation expansion, said in the statement. “The expected return is significantly above our capital costs.”

Germany’s Offshore Wind Foundation said that the results of the first auction were so low as to justify the government raising its target for total capacity beyond 15 GW for 2030.