Nashua, NH — As the Northeastern coastline is still busy cleaning up after damages from Hurricane Sandy months after its landfall, offshore wind proponents are moving ahead with plans that they hope will help mitigate future storm impacts. 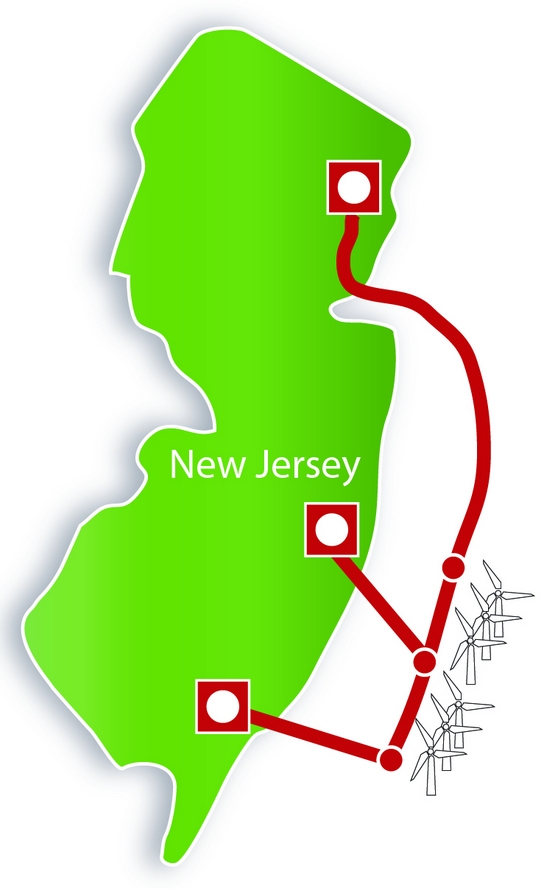 In New Jersey, one of the hardest-hit areas from Sandy, plans are moving forward to construct a 189-mile portion of the planned offshore wind transmission backbone from Jersey City to Atlantic City. This section is phase one of the proposed Atlantic Wind Connection undersea transmission line project, intended to stretch from Virginia to New York City, which has big-name support from Google, Good Energies, and more.

According to the Atlantic Wind Connection, led by Trans-Elect, the New Jersey line will cost an estimated $1.3 billion and begin construction in 2016. Once complete in 2019, it is expected to carry around 3,000 MW of electricity to the coastline, sourcing from prime areas identified by the Obama administration.

Many involved in the project are confident that the transmission line will help reduce storm impacts by sourcing offshore energy during blackouts to hospitals and emergency response stations, but some are more skeptical. Todd Schneider, a spokesperson for Jersey Power and Light, told the New York Times that even though power could be sourced from offshore wind during or after a major storm, it may not be able to reach facilities in need due to onshore transmission line disruption – the utility lost 55 of its 75 transmission lines during Hurricane Sandy.

The economic benefits, however, could prove to be substantial. The project has the potential to create more than 20,000 jobs and push $9 billion in the New Jersey economy and $2.2 billion in local tax revenue, according to an IHS Global Insight study. The line is also expected to bolster renewable growth in the state, which has mandated that 22.5 percent of its electricity be sourced from renewables by 2021.

“The NJ Energy Link can make the grid more reliable and lower the cost of energy in New Jersey by delivering both offshore wind and conventional electricity to where it is needed and when it is needed along the coast, whether that be southern, central or northern New Jersey,” said Robert Mitchell, CEO of the Atlantic Wind Connection, in a release.

Further up and down the Atlantic coast, the Bureau of Ocean Energy Management (BOEM) is holding seminars to discuss the upcoming offshore wind leasing auctions. Scheduled in Narragansett, Rhode Island and Richmond, Virginia, the seminars will educate potential bidders on the Smart from the Start-influenced auction process, which is scheduled later this year. Smart from the Start was established by Secretary of the Interior Ken Salazar in 2010 to speed and facilitate the adoption of offshore wind. Documentation on the leasing process can be found here.

BOEM announced the availability of two proposed leasing areas – a 164,750-acre plot off the coast of Massachusetts and Rhode Island, and an 112,800-acre area off the coast of Virginia. The Mass./R.I. plot will be auctioned off in two leases – the North and South Zone – and are expected to support up to 2,000 MW of win generation combined. The Virginia plot is expected to produce similar numbers.