Following the continued success of the offshore wind development process in the state – the Department of the Interior announced last week that it will hold first-ever leasing auctions for more than 164,000 acres off the coast of R.I. and Massachusetts on July 31 – Whitehouse explained some lessons learned. “You can have the best technology in the world, but if you can’t site somewhere then [development] problems still remain,” he said. 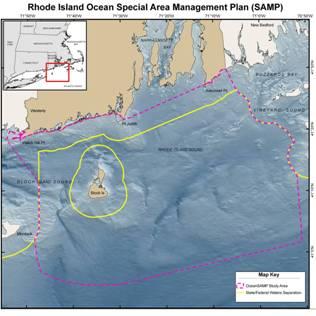 To address siting issues, R.I. established the Ocean Special Area Management Plan (SAMP), a coastal management and regulatory tool that utilizes scientific research from the University of Rhode Island for a balanced, safe approach to the development and protection of offshore resources. Whitehouse credits Ocean SAMP as the reason why the DOI offshore wind leasing program is in Rhode Island and moving forward. It involves all affected parties to renewable development, from fishermen to the shipping industry to the environmental community.

“We need to start with the proposition that the government entity doesn’t know everything,” said Whitehouse. “So shouldn’t the American people be involved in decision-making? Shouldn’t they be at the planning table? If they’re at the table, shouldn’t they have all the necessary information available to them? All together, this is nothing but common sense.”

Whitehouse gave several examples of how siting can efficiently solve issues. For example, Massachusetts effectively used spatial planning to solve a critical problem that involved both shipping and wildlife. Whale strikes had caused shipping lanes to be slowed, so the state gathered a consortium of experts to assess the situation. They geolocated the whale strikes, identified the main line of whale travel, and moved the shipping lane two degrees – improving both environmental and economic issues. “You just need to get the right people in the room, get the right information, and move forward efficiently and rapidly,” Whitehouse said.

John R. Miller, executive director of the Marine Renewable Energy Center (MREC), agreed with Whitehouse. MREC, based in New Bedford, Mass., is involved in renewable energy marine spatial planning in R.I. and Mass. MREC and New Bedford city officials visited Germany and Denmark last month to learn about how they developed their offshore wind industry. New Bedford shares the same characteristics (high unemployment, poor economy) the German town of Bremerhaven once did before it was reinvigorated by offshore wind, and New Bedford officials hope it will have the same effect on their city. Miller said New Bedford has already broken ground to create an offshore wind manufacturing and distribution terminal it hopes will serve the New England coast. But in order for all of these grand plans to be successful, Miller said that Whitehouse hit the nail on the head – siting is key. And with new wave and tidal technologies nearing commercialization, marine spatial planning will be more important than ever.

“Common siting issues should be dealt with in a quick responsible way through marine spatial planning. It’s the application of common sense to common problems,” said Whitehouse. “We should do the same for the [wave and tidal] industry – I hope it grows very rapidly, and I expect it to.”