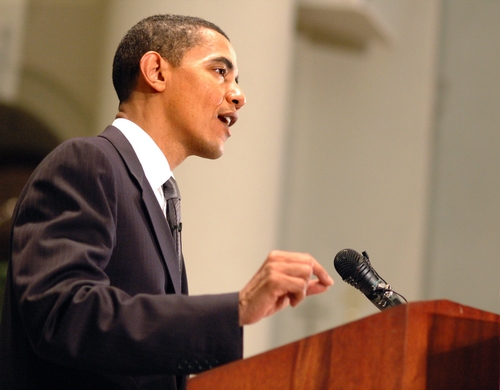 WASHINGTON D.C. — As leaders in Washington obsess about the fiscal cliff, President Barack Obama is putting in place the building blocks for a climate treaty requiring the first fossil- fuel emissions cuts from both the U.S. and China.

State Department envoy Todd Stern is in Doha this week working to clear the path for an international agreement by 2015. While Obama failed to deliver on his promise to start a cap-and-trade program in his first term, he’s working on policies that may help cut greenhouse gases 17 percent by 2020 in the U.S., historically the world’s biggest polluter.

“We are making good progress, and I think we are on track,” Stern told reporters today in Doha when asked if the U.S. can meet its goal even if Congress doesn’t pass climate legislation this decade.

Obama has moved forward with greenhouse-gas rules for vehicles and new power plants, appliance standards and investment in low-emitting energy sources. He’s also doubled use of renewable power and has called for 80 percent of U.S. electricity to come from “clean” energy sources, including nuclear and natural gas, by 2035.

“The president is laying the foundations for real action on climate change,” Jake Schmidt, who follows international climate policy for the Washington-based Natural Resources Defense Council, said in an interview in Doha. “Whether or not he decides to jump feet first into the international arena, we’ll see.”

Envoys from more than 190 nations are entering their second week of talks today at the United Nations conference working toward a global warming treaty. Their ambition is to agree to a pact in 2015 that would take force in 2020. It would supersede limits on emissions for industrial nations under the Kyoto Protocol, which the U.S. never ratified.

Negotiations so far continue to be plagued by divisions — largely between rich nations like the U.S. and fast-developing economies such as China and India — over issues including financial aid to help the world’s most vulnerable countries deal with floods, droughts, rising sea levels and other climate- related changes.

This year marks the end of so-called fast-start finance of almost $30 billion pledged by developed economies to poor nations from 2010 through 2012. Industrialized countries have promised to ramp up financing to at least $100 billion by 2020. So far, those nations including the U.S. haven’t provided specifics on their plans for the funding.

The Obama administration has “every intention to continue pressing forward” with funding to the extent it can without opposition from Congress, Stern said today.

Another potential sticking point in the climate talks revolve around a push by the European Union and developing countries for the U.S., Japan, Canada and other developed nations to commit to steeper emissions cuts between now and 2020.

Since 1990, the EU has decreased its greenhouse gases by 18 percent, while the U.S. has increased emissions by 10.8 percent, EU Climate Commissioner Connie Hedegaard said in Doha today.

“We’re moving very fast in the wrong direction,” Hedegaard said. “All major economies, being it the EU, or U.S., or emerging economies, all of us will have to do more.”

U.S. negotiators have said they have no plans to raise the level of its emissions-reduction goal for 2020. The U.S. has “done quite significant things” to cut greenhouse gases in Obama’s first four years, Stern said, adding that “more can be done.”

Obama’s push so far is being pursued without fanfare as the administration and Congress grapple to avert a budget crisis and $607 billion in automatic spending cuts. Unlike 2009, when Obama failed to prevent the collapse of climate talks in Copenhagen, the U.S. can point to more concrete actions it’s taking in the fight global warming.

The U.S. president has more ammunition at hand. The Environmental Protection Agency is required under the Clean Air Act to move ahead with regulations on emissions from existing power plants. Those are responsible for about a third of U.S. emissions, the largest chunk.

Measures such as those, along with continued low natural gas prices and state actions, can cut emissions 16.3 percent by 2020, Resources for the Future, a research firm, estimates. Emissions already are down 8.8 percent from 2005 levels, according to Jonathan Pershing, a State Department negotiator in Doha.

“The U.S. is in a much stronger position going into the Doha talks despite failure of Congress to pass comprehensive climate legislation,” said Trevor Houser, a former U.S. climate negotiator who served during the Copenhagen meeting. “For countries like China that were able to hide behind a perception of U.S. inaction, the fact that U.S. emissions are falling helps increase pressure. It takes away the excuse that action is stalled because of the U.S.”

A summer of extreme weather also is supporting the U.S. delegation in the talks by raising public awareness and concern about the risks of climate change, Pershing said last week in Doha. So far this year, superstorm Sandy devastated the East Coast while wildfires raged in the west and a record drought wrecked crops in the Midwest.

“The combination of those events is certainly changing the minds of Americans and making clear to people at home the consequences of the increased growth in emissions,” he said at a Nov. 26 news conference in Doha.

The portion of Americans who say climate change will affect them a “great deal” or by a “moderate” amount rose by 13 points to 42 percent from March to September, and 68 percent said global warming will hurt future generations, up from 59 percent in May 2011, according to a poll by Yale University and George Mason University.

“That number barely budged for four years, then suddenly jumps,” Andrew Light, coordinator of climate policy at the Center for American Progress, a Washington-based research group with ties to the Obama administration. “If you did same survey today, after Sandy, the number would be even higher.”

Light notes that the number of Americans who believe climate change is real climbed to 70 percent in September from 57 percent in 2010. The number of people who say global warming isn’t happening has fallen almost by half, to 12 percent today from 20 percent over the same period.

To date, few of the administration’s programs get attention away from Washington and the environmental groups following them.

Such policies “are just the beginning,” said Robert Stavins, director of Harvard University’s Environmental Economics Program in Cambridge, Massachusetts. He expects the U.S. to meet its goal of cutting emissions 17 percent. While that’s less than the 40 percent scientists say is needed. European Union’s pledge to reduce pollutants 20 percent by 2020 and says it will go to 30 percent if others follow.

“The interesting thing is that for the past three UN climate conferences, the U.S. delegation has never talked about this,” Stavins said in an interview. “They haven’t been interested in taking credit internationally for what’s already in place. When I mention this to other parts of the world, people are shocked.”

The silence, he said, is understandable in part because the “last thing” the Obama administration wants is for State Department officials overseas making it appear as if the White House was trying to “take an end run around the Congress” on climate policy.

“It would have been very bad for the president’s re- election,” he said.