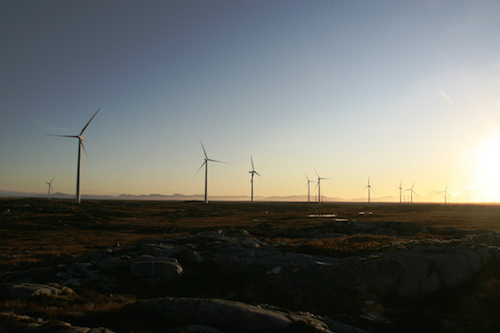 The Norwegian wind industry is in the midst of a historically prosperous year, with the Norwegian wind association, NORWEA, optimistic that 2016 will close out with investment decisions totaling 2,000 MW of new wind power capacity.

A string of investment decisions taken this year — amounting to 1,430 MW — has contributed to the forecast, with key projects including Fosen (1,000 MW), Hamnefjell (52 MW), Tellenes (160 MW), Egersund (110 MW), and Raskiftet (112 MW) wind projects. With more projects on the horizon, NORWEA believes investment decisions carrying an additional 600 MW are realistic before 2017.

The developments mean Norway is closing in on power production of 10 TWh per year; a significant milestone considering that only last year Norway set a wind power production record of 2.5 TWh.

With long lead times in projects, it will be a couple of years before capacity from this year’s investment decisions are realized, but nevertheless the news has been welcomed by a domestic industry keenly anticipating growth.

Several factors have driven the growth he explains: “Between 2010 and 2012 the industry was basically at a standstill until a decision to enter the Swedish Certificate System was made. It’s taken time to get going again, and only now we’re seeing that projects have matured enough to reach final investment decisions.”

He added that the development of new wind technologies has been important, and helps compensate for low electricity prices seen in the region.

“These factors have enabled many excellent projects to compete in the technology-neutral certificates market,” he said. “It’s those that we’re seeing now.”

“We’re seeing virtually every wind farm being invested in has some degree of foreign investment made towards it,” he said, adding that they are either fully or partly owned by outside groups.

“We put a lot of time and effort into facilitating these investments — but it’s paying off,” he said. “We’d never have reached these figures without foreign money. Take Fosen, that’s 40% owned by Credit Suisse via the Nordic Wind Power Consortium, while the Tellenes and Egersund projects will be fully owned by foreign investors.”

According to Aasheim, more than half of the decisions taken this year will represent foreign investment.

“I don’t see any project of substantial size being built without some degree of foreign investment in the mix,” he said.

NORWEA is largely to credit for attracting foreign players. Since 2012 the association has hosted an annual finance seminar, inviting investors, banks, and Norwegian developers to network.

“It’s a sort of Norwegian Wind 101 — an excellent way of making opportunities in Norwegian wind more accessible to investors,” Aasheim said. “We present key information on projects, the certificate system, and ultimately provide confidence on what the Norwegian wind industry is capable of. Through the year we’re then actively pursuing foreign players, and providing match-making services to connect investors and project developers with domestic groups.”

Efforts to foster foreign investment and confidence, combined with maturing circumstances of the Norwegian wind market have culminated in it’s largest victory to date: the revival and financial investment decision of the mammoth 1,000 MW (3.4 TWh) Fosen project — a wind complex comprised of 278 turbines over six wind farms in South Trøndelag, central Norway, being developed by Statkraft.

Slated to be the Europe’s largest onshore wind development, Fosen also has the lowest estimated costs of wind power yet seen in Europe, with NORWEA estimating an levelized cost of energy of between 35-40 euros/MWh.

“The Fosen project was, and is, a game changer,” Aasheim said. “The size of it attracted a lot of interest, and investors took notice of the opportunities in Norwegian wind. Although it’s probably an overstatement to call it a make or break for Norwegian wind, it sure did help pave the way for the investment decisions we are seeing, and will continue to see over the next months.”

Construction is already underway on two of Fosen’s farms, with first wind expected in 2018; by 2020 the complete complex is expected to be operational.