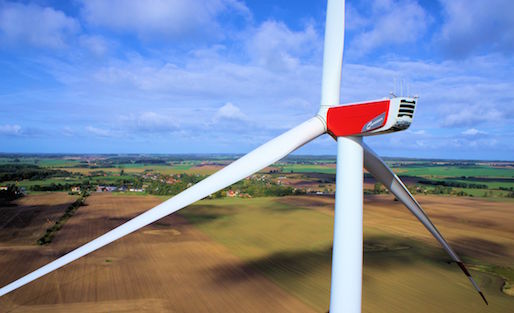 Germany’s biggest wind turbine maker agreed to purchase its counterpart in Spain in a transaction that will create the fifth-largest manufacturer worldwide amid a shift toward renewable energy.

Nordex SE will pay cash and stock valued at 785 million euros ($880 million) for the wind assets of Acciona SA, which in turn will become the largest shareholder of the German company. The deal is expected to be completed in early 2016, subject to approvals, and will create an operation with minimal overlap in its product offering and regional focus, Nordex’ Chief Executive Officer Lars Bondo Krogsgaard said.

The move combines businesses of wind power plants that rank ninth and 15th worldwide, according to data from Navigant Consulting Inc., a market research firm. It would solidify Nordex’s position against more diversified manufacturers such as Vestas Wind Systems A/S of Denmark and General Electric Co. of the U.S. It would spread its sales footprint of Nordex, which has focused in onshore wind farms in Europe.

“Nordex has a strong position in developed European markets while Acciona wind power is particularly successful in the Americas and in emerging markets,” Krogsgaard said in a conference call on Monday. While Nordex focuses on complex technical projects typically burdened by land restrictions, Acciona Windpower’s products focus on large-scale wind farms that face fewer planning hurdles, he said.

Nordex seeks a double dividend in acquiring the Spanish turbine maker, tapping its expertise in markets beyond Europe while also creating scale amid expectations that the market will increasingly favor bigger players. Germany is moving to auction onshore wind power and solar power from 2017, adding pressure on costs for future bidders in the market.

Combined with sales of shares from other large shareholders after the deal, Alcobendas, Spain-based Acciona will have a 29.9 percent of Nordex, according to a statement released Sunday. Under the accord, Acciona can’t increase its stake to 30 percent or more for three years.

“The deal is very positive for Acciona because it’s a step toward becoming a global leader in the wind power industry,” said Carlos Ortega, a trader at Beka Finance Sociedad de Valores SA. “Acciona and Nordex complement each other very well because they have different targets. It allows Acciona an entrance to a part of the market it didn’t have access before.”

Acciona Windpower designs and produces wind turbines, owning three production plants in the U.S., Brazil and Spain, with another under construction in India. The company has made turbines for more than 100 wind farms in 18 countries, the release said.

Nordex operates in 20 countries, producing, installing and servicing wind farms. The company projects revenues of 2.2 billion euros in 2015, according to the release. Its shares closed Oct. 2 at 24.96 euros.