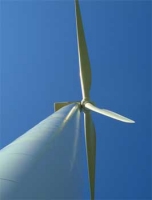 After two years of cutting through regulatory red tape, all the agreements are in place to allow construction of the Noble Thumb Windpark near Ubly, Michigan, to proceed. The Huron County Board of Commissioners and Huron County Planning Commission have signed off on site plans for construction in Sheridan and Bingham townships.

All that remains to be done is completing the “tons of paperwork” necessary to finance the 46-turbine project, development manager Jeanette Hagen said. She was uncertain how long that would take, but construction may not begin this year as Noble Environmental Power had hoped.

Once Phase I of the wind park—located in Sheridan and Bingham townships—is up and running, the company will turn its attention to Sanilac County. Plans for Phase II call for 60 turbines to be built along a ridge running through Delaware, Minden, Marion, Bridgehampton and Washington townships all the way to Carsonville.

The company started contacting Sanilac County landowners about easement rights two years ago at the same time it started in Huron County.

Residents near Ubly, concerned the giant turbines would disrupt the area’s quiet, rural landscape have largely given up the fight and accepted that, for now, trying to keep wind power from coming to Michigan’s Thumb is about as futile as trying to keep the wind itself out.

The Noble Thumb Windpark no longer is poised to be the state’s first commercial-scale project to convert wind energy to electricity. That honor goes to the nearby Harvest Wind Farm in Oliver Township near Elkton.

About one-third of the park’s 32 turbines have been erected since construction started in August. The park’s owner, John Deere Wind Energy, expects to have all the turbines operating by the end of the year.

Crews from Alliant Energy of Madison, Wis., are putting in 10-hour days assembling the turbines, which have blades that reach 396 feet into the air.

By comparison, DTE Energy’s coal-fired Belle River Power Plant has a capacity of more than 1,200 megawatts.

Proponents of wind power in Michigan say it is a clean, renewable source of energy that can reduce the use of fossil fuels. Opponents say that, due to the unreliability of wind, power plants have to maintain their output, and that wind power is only profitable due to tax incentives.

The Thumb has some of the highest average annual wind-speed readings in Michigan, said Brian Lammers, manager of wind energy business development for John Deere, which also has wind parks in Texas, Minnesota, Missouri, Illinois and Idaho.

John Deere, which worked with Michigan Wind LLC of Big Rapids to develop the project, ran into some of the same problems as Noble Environmental Power. The limited capacity of the Thumb’s electrical transmission system, which moves electricity long distances on high-tension wires, was a concern for both.

Identifying the necessary upgrades and guaranteeing their costs early on was one of the main reasons Harvest Wind Farm was able to start construction first. The Noble Thumb Windpark also had changes in management that set its project back.

“It’s an opportunity for the county be in the forefront of alternative energy development in the state, plus it also gives us a way to diversify our local economy,” he said.

Income is being generated by the workers staying in hotels and eating at restaurants. A few long-term jobs, about 10 per wind park, will be created to keep the turbines operating.

The wind parks increase the county’s tax base, Osentoski said, and generate income for farmers, who receive payments for allowing turbines on their land.

“We’re starting to see some additional tourism,” he said, “with folks interested in … observing the construction of the turbines—which is pretty impressive, I must say.”

“I really think it is something that is needed, and hopefully it can come to pass,” Washington Township Supervisor Shirley Feirer said. “It could be a definite asset to the county.”

This article first appeared and was reprinted with permission from The Times Herald.