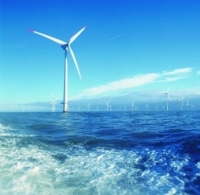 Barcelona, Spain [RenewableEnergyWorld.com] Led by European utilities, the offshore wind industry is expected to grow by leaps and bounds over the next decade. Globally, installed offshore capacity is expected to grow to nearly 45 gigawatts (GW) in 2020 according to a new market study from Emerging Energy Research (EER). With large northern European utilities driving the industry forward in the short term, the stage is being set for North America and Asia offshore development as well, according to EER.

“The global offshore wind energy industry’s entry into the next decade will be marked by concrete progress built on the past 10 years of moving along the learning curve,” said Eduard Sala de Vedruna, EER senior wind analyst. “While the global offshore market has been slow to take off due to cost and logistical challenges — climbing from 70 MW installed to 1.5 GW over the past eight years — the industry is now scaling thanks to increased focus on offshore by Europe utilities.”

With almost no projects in the water currently, both Asia and North America are at European projects for technology and cost benchmarking. Between 2010 and 2020, these two regions will contribute nearly 25% of the total new offshore capacity installed worldwide, according to EER. In Europe onshore markets markets are struggling to find land and higher capacity factors offshore are driving governments to give offshore developers incentives providing key support to drive industrial build-out.

“Offshore is still very much a European industry led by the UK and followed by Germany, Sweden, the Netherlands, Belgium, and Denmark,” Sala de Vedruna said.

EER expects Asia to tap its offshore markets in 2014, led by China and Korea. In North America, test projects in the US (Deepwater Wind) and Canada (NaiKun) may come to fruition by 2012, with over 6 GW projected by 2020, according to EER.