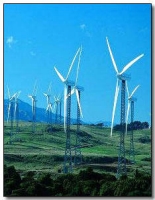 Tauranga, New Zealand [RenewableEnergyAccess.com] Technological advances can create reason’s to expand, and the New Zealand utility TrustPower wants to ensure that wind power technology works for them. The company plans to build, what they are calling, the Southern Hemisphere’s most technically advanced wind farm.

TrustPower’s existing facility in the Tararua ranges is approved for 103 turbines. In 1999 the company bought 48 Vestas turbines on-line for a total of 31.6 MW of installed generation capacity, and increased that capacity in 2004 by 36.3 MW with an additional 55 Vestas V47 turbines. Approval of the wind farm expansion for 2005 would allow the company to install 40 turbines of 3 MW each on land adjacent to the Tararua development, and increase their generation capacity by 120 MW, for a total capacity of 187.9 MW. Chief Executive Keith Tempest said the company has lodged a resource consent application with the Palmerston North City and Tararua District Councils for the expansion. “We have lodged this consent application somewhat later than we had hoped, but that reflects our efforts to consult with a wide range of local stakeholders,” Tempest said. “That initial consultation has revealed overwhelming support for our proposal, and as a result we are confident the project will have community support. Early next year everybody will have the opportunity to put forward their view as part of the resource consent process, and we encourage them to do so.” The turbines proposed for the expansion represent some of the latest technology available on the world market, and demonstrate the huge advances in efficiency that wind-turbine manufacturers have achieved over the past few years, according to the company’s press release. Only a year ago, TrustPower would have been looking to install at least 70 turbines to achieve the same performance, and five years ago would have required more than 160. “Our Generation Manager and Windfarm Development Manager recently completed a tour of international wind-turbine manufacturers, to make on-site inspections of their manufacturing and research and development facilities, and to validate each manufacturer’s performance, warranty and service support claims,” Tempest said. “As New Zealand’s most experienced wind-farmer, TrustPower wants to make sure that it is using the very best technology available, in terms of cost, performance efficiency, reliability, and backup.” Project costs are estimated at NZ $220 million (US $158 million). Construction of the project should inject an estimated NZ $70 million into the local economy, and come on-line by the end of 2006. The company said it should need to employ a further team of seven full-time technical staff, which will also be of on-going benefit to the region.