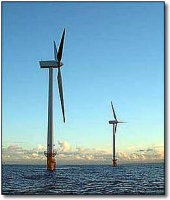 The next phase of UK wind farm development started last week with the government giving the go ahead for four new wind farms to be built off the coast of Norfolk, Lincolnshire and Essex. The new wind farms will produce more than 450 MW of electricity, enough to power a total of about 230,000 homes, equivalent to the population of a city more than six times the size of Lincoln or four times the size of Norwich. Each site will be made up of 30 turbines — all located at least three miles from the coast off East Anglia and Lincolnshire.

London, England – October 27, 2003 [SolarAccess.com] “Wind power is playing a central role in the UK’s renewable energy revolution,” said Energy Minister, Stephen Timms, speaking at the Renewable Power Association Conference at Olympia. “We are building the first phase of offshore wind power and these new farms will help us towards our target of producing 10 percent of our electricity from renewable sources by 2010. We recently announced the next phase of wind farm development which could see windfarms powering up to one in six of UK households. We are committed to reducing our carbon dioxide emissions by 60 percent by 2050 and renewable energy will help us meet our long term energy needs while also addressing our environmental concerns.” The four new wind farms are: – Lynn, located three miles off the coast of Skegness, which will have a maximum capacity of 108 MW. – Inner Dowsing, located three miles off the coast, north of Skegness, Lincolnshire, which will have a maximum capacity of 120 MW. – Cromer, about four miles off the coast of Cromer, with a maximum capacity of 120 MW. – Gunfleet Sands, four miles off the coast off Clacton-on-Sea, with a maximum output of 108 MW. All four projects were given consent to proceed with construction under the Transport and Works Act 1992. The Crown Estate awarded the developers leases to use the seabed for windfarms in April 2001. Of the 18 projects granted leases, 12 have been granted permission to begin construction by the government, totaling more than 1200MW. North Hoyle, off the North Wales, will be the first offshore wind farm to be completed, and is expected to be opened next month.