Wind energy is blowing away skeptics — it’s so close to achieving cost parity with fossil fuels that just a little extra efficiency is all that is likely needed to push it into the mainstream and past the Energy Department’s goal of 20 percent wind energy by 2030.

Wind energy is blowing away skeptics — it’s so close to achieving cost parity with fossil fuels that just a little extra efficiency is all that is likely needed to push it into the mainstream and past the Energy Department’s goal of 20 percent wind energy by 2030.

That extra efficiency may be realized with the help of a software tool built by the Energy Department’s National Renewable Energy Laboratory (NREL). It’s called Simulator for Wind Farm Applications (SOWFA), and it can calculate how undulating ground, whipping blades, surface temperatures, and other variables alter the air flow and energy production at wind farms. 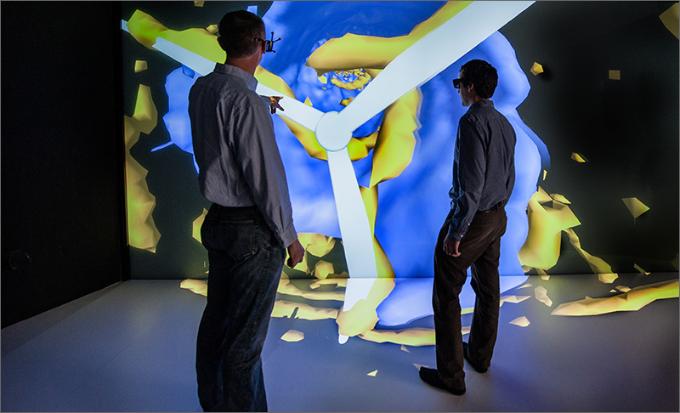 SOWFA’s key innovation is that it simulates an extensive range of scales—from regional weather patterns down to the space between turbines and all the way to the movement of electrons. It gives a complete picture of an active plant, showing how controlling each turbine can influence the direction of the wakes, and detecting the effect on downwind turbines. And it helps researchers understand how local atmospheric conditions affect local wind around the wind farm.

SOWFA is the first tool that enables developers to improve the performance of not only one wind turbine, but the entire wind farm. And because it is an open-source “community” software platform available for free to academics, investors, wind developers, and manufacturers, users have the support of an online forum where they can discuss problems and solutions with other SOWFA users.

One application of SOWFA is the simulation and design of coordinated control of individual turbines in order to maximize plant-wide output. Using these controllers, upstream turbines can yaw their rotors to redirect their wakes away from downstream turbines, substantially improving power capture. Wake losses at wind farms can reduce total power production by 10%. If SOWFA can be used to design controllers that cut those losses in half, that’s a huge benefit. If employed at wind farms across the country and the world, the additional revenue could add up to billions of dollars. 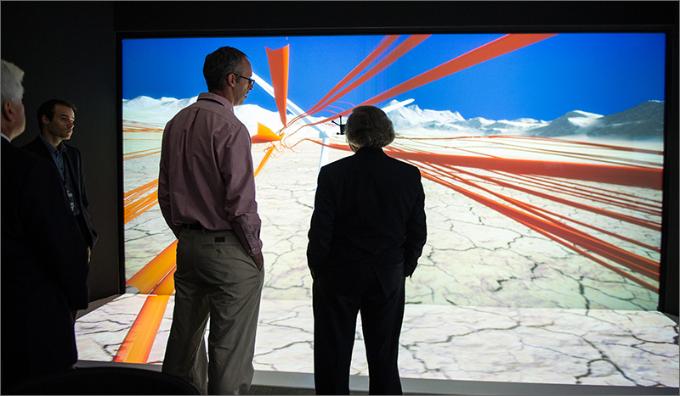 NREL Senior Engineer Pat Moriarty, left, explains a wind turbine model at the ESIF Insight Center to Secretary of Energy Ernest Moniz, right, during a tour for the dedication of the ESIF last year. Photo by Dennis Schroeder, NREL

Across the Great Plains and at many spots offshore, if you see one wind turbine, you’re likely to see a dozen or a hundred. A wind farm provides economies of scale—contract with a farmer or win a permit for offshore wind, and it makes sense to erect multiple turbines all tied to a single system.

However, those rows of giant turbines can be problematic. As the turbine’s blades are turned by the wind, they also disrupt the wind, causing a wake similar to a calm spot behind a tree or building. If that wake heads straight for the next turbine downstream—maybe 800 meters away—its churn will mean weaker wind and less power produced by that second turbine.

But SOWFA shows turbine manufacturers, wind farm developers, or investors how a yaw can impart a thrust that curves that wake around the downwind turbine. “Wake, from a power perspective, is lower-energy wind,” said NREL Senior Engineer Paul Fleming, one of the engineers using SOWFA in his research. “If you can move away that deficit of energy, you will have faster winds and more overall production at the wind farm.”

“In the past, wind farms have relied on dissipation to control that energy loss—they just move the turbines farther away from each other,” said NREL Senior Engineer Pat Moriarty, a leader of the SOWFA team. “Now, we can control it in a different way. And there are other ways to achieve more control.”

SOWFA was created to model all the different variables at a wind farm—the topography, the air, surface and air temperatures, even the effects of the turbines themselves. Other models have looked at pieces of the whole, but now that the wind industry is maturing and the cost margins are decreasing, it’s increasingly important to model the whole system and maximize energy production.

Turbines and Central Controller Talk to Each Other 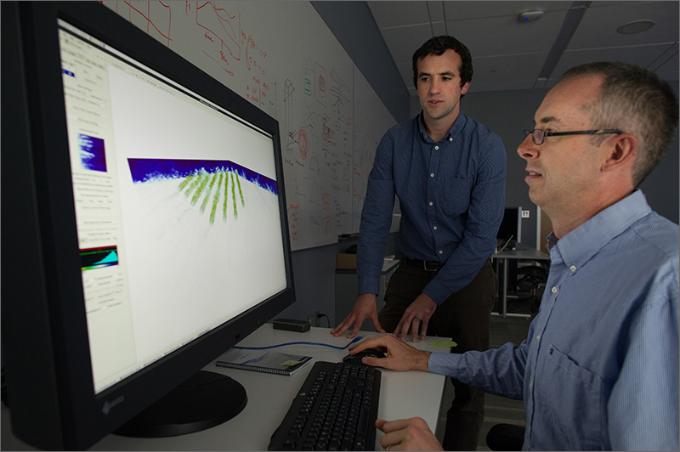 With SOWFA, the central super-controller can receive information from individual turbines and send command messages to them. In other words, the central controller and the turbines can talk to each other. SOWFA’s central controller can send a message asking a turbine to adjust its yaw—but the turbine can override that command if conditions at the turbine are such that adjusting the yaw would be unsafe. This architecture is designed to mimic as closely as possible how wind plant controls might be implemented at a real wind farm.

Another reason SOWFA is unique among wind modeling tools is that it has the capacity to incorporate the heat on the earth’s surface into its calculations. The sun is the main reason that air moves. It causes different air temperatures and pressures, coaxing the wind in a particular direction at a particular speed and at different heights above the ground. The varying temperature of the ground and the hills and vales of the farm also influence how the wind moves through the atmosphere. In the daytime, when the ground is hot, the wind tends to be more turbulent, rising from the surface. At night, when the ground is cooler than the air, the wind becomes more horizontal and speeds up. The same rules apply offshore, except instead of the ground there is the water surface, and instead of hills and vales, there are the size and motion of the waves.

The software tool also can deliver the numbers to show a possible overall net benefit if that first row of turbines reduces the capture of wind so the second row can capture more.

SOWFA has drawn acute interest from manufacturers, developers, and utilities. “One of the most important outputs of SOWFA is the reduced uncertainty,” Moriarty said. “The finance community cares not just about energy production, but about the uncertainty of energy production over the next 20 years that wind farm would be operating. They particularly want to know what the worst-case energy production can be.”

SOWFA’s improved look at physics will help the community better understand the uncertainty gap between the average energy production and the worst-case energy production. That, in turn, should lower the interest rates for financing a wind farm, which can be a huge part of the total cost.

Supercomputers made SOWFA possible, said Moriarty, noting that he and his NREL colleagues started work on the project in 2005, but that its success accelerated as computers reached the ability to do trillions of calculations per second. To accurately predict the motions of wind at a wind farm, computers need to simulate the dynamics in the space occupied by up to a hundred turbines — and model the flows, counterflows, cross flow, and temperatures in every square meter.

Of course, the goal is to arrive at the most accurate forecasts of wind energy production before the turbines are erected. Moriarty, Fleming, and the rest of the team use NREL’s Peregrine high performance computer to simulate the movement of air through rows of turbines.

Understanding the dynamics of a wind farm means analyzing the effects of everything from clouds to rises and dips in the terrain, and even the height of surrounding  crops.

Researchers can use SOWFA to study how new control schemes can increase power production and reduce fatigue from wake effects, and developers can use SOWFA to move turbines like chessmen on a chess board to maximize output — all before construction begins.

The Energy Department, which provided funding for the SOWFA project, is in the process of developing experiments to test that the modeling predicted by SOWFA matches real-life conditions and energy output at the wind farms.