California, USA — The first-ever study using data from modern wind farms throughout North America finds that avian mortality among most species of small passerines (birds) may be biologically insignificant. 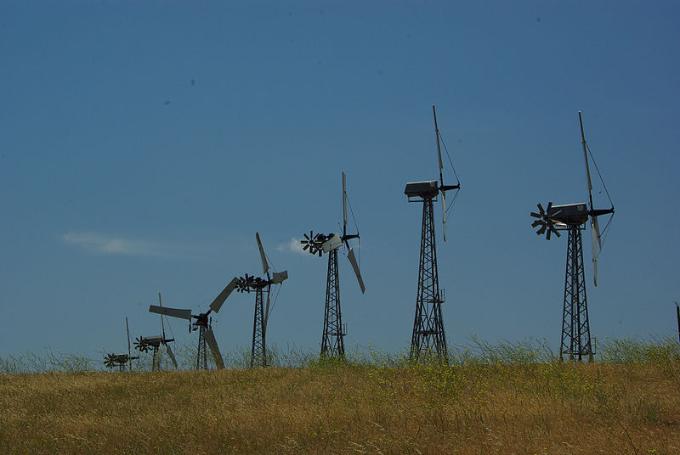 Antiquated technology, like these 1980s turbines from the oldest wind farms at Altamont Pass, are not representative of today’s turbines, and have biased earlier studies.

The study, which includes wind farm data across North America (the U.S. and Canada), is the most comprehensive to date, as previous studies over-sampled outdated turbines. The U.S. generates about a third of the world’s wind energy, with 81 GW of capacity, most of which was installed in the last ten years using modern turbines.

The study was supported by the American Wind Wildlife Institute (AWWI), a non-profit focused on bringing together the wind industry, wildlife management agencies, and science and environmental organizations, to facilitate responsible wind energy development while protecting wildlife, for example, in replacing unsafe turbines at Altamont Pass, or use of bird detection and deterrents.

The peer-reviewed study found that an estimated 134,000 to 230,000 small passerines collide annually with turbines across the U.S. and Canada. Using conservative estimates, this amounts to less than 0.01 percent of the population of small passerines, while an estimated 30 percent die of natural causes yearly.

North America’s 5 billion small passerines — a taxonomic group that includes all small songbirds like larks, blackbirds, warblers and sparrows — produce up to eight young annually. “Small passerines have high annual mortality,” said Taber Allison, Director of Research and Evaluation at AWWI. “Two to three years is a typical lifespan, though individuals can of course live longer.”

The avian mortality rate found in the new study updates estimates from previous studies that over-sampled information from the earliest wind farms at California’s Altamont Pass. The faster-turning small kilowatt-level 1980s turbines were low on the hillside, where raptors swoop on updrafts to hunt prey on the ground.

“When you have a sample that is heavily weighted with data from the Altamont and you apply that analysis to the entire country, it may result in an overestimate,” said Allison.

Today’s U.S. wind farms use 1- to 3-MW turbines, are sited on flatter ground, turn much higher on concrete towers — out of the hunting range of raptors, while lower than the migration corridor of small passerines.

To reach the most reliable numbers possible, the authors analyzed data from these more representative conditions, while correcting for missing and scavenged corpses and missed birds due to detection bias.

“This study was the most comprehensive. It includes the most data that is available,” said Allison. “The other studies that came out earlier did not have as many studies to work with.”

Currently these researchers are working with the USGS on a new study, as one of several analyzing the effects of wind farms on birds and bats.

“We are currently conducting similar analyses on data related to the other bird taxa including birds of prey like raptors and water-associated birds, and have plans to publish these studies by the end of the year,” said Erickson.