LONDON — A new, safety-conscious technique for installing offshore wind towers has been used for the first time at the UK’s Dogger Bank site, the developer has announced.

Forewind, a consortium composed of RWE, SSE, Statoil and Statkraft, installed the second of Dogger Bank’s two meteorological (“met”) masts last weekend using what it called a “human-free” technique to place the steel tower atop the suction bucket foundation.

After installing the foundation, which is the first of its type to be used in UK waters, the next step in the installation process was maneuvering the met mast’s 93-metre, 44-tonne galvanised steel lattice tower into place atop the foundation.

Standard industry practice calls for human riggers to climb to where they can manually help with the final positioning, during which they risk being injured or even crushed by swinging or falling lattice tower sections. But in this instance lightweight plastic guide cones and video cameras were fixed to the tower sections before lifting began. The video cameras allowed for remote positioning and the plastic cones helped to stabilise the load, enabling the crew to stay safely on the Brave Tern‘s deck.

As well as being safer than traditional methods, this technique is also faster as the cones quickly stabilise the load in the final lifting stage, Forewind said. And the company said the cones enable easier handling, won’t scratch the tower’s coating, and help to avoid structural damage.

Human riggers are still needed for the last stage of the installation, which involves climbing the mast in order to bolt the sections together and remove the guide cones and cameras – but this part of the process is significantly less dangerous.

Before its implementation, practice runs of the technique were carried out in a drydock at the Belfast plant of foundation fabricator Harland and Wolff. 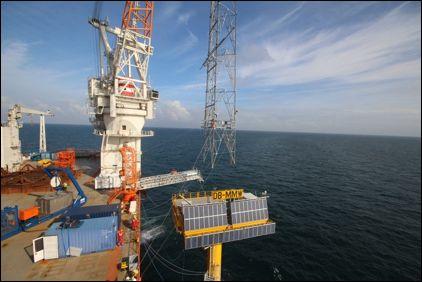 The use of this technique is an example of industry cooperation and the safety and efficiency gains that can be made when developers and contractors work closely together, Forewind said. General manager Lee Clarke said the safer installation technique shows how the growing offshore wind industry provides companies and contractors with the scope to put new ideas into practice for the benefit of all.

“The scale and scope of the Round 3 projects like Dogger Bank will continue to provide ongoing opportunities to introduce innovative technological advances and improved methods that will help reduce costs and improve efficiencies industry-wide,” Clarke said.

Dogger Bank Met Mast West will now be set up and commissioned. Forewind expects it to be fully operational by the end of this month.