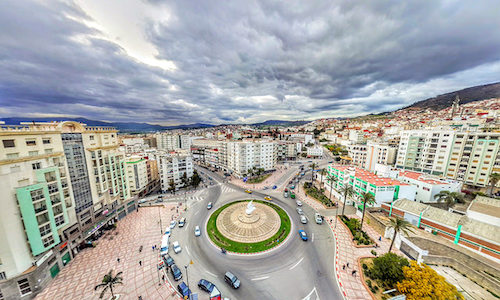 Morocco has a strategic location in the North West of the African continent and is only 14 kilometers from Europe, across the Strait of Gibraltar. In addition, it has varied relief — the Atlas and Rif Mountains, the Sahara — and the length of its coasts — the Atlantic Ocean and the Mediterranean Sea constitute 3500 km of coastline.

In the Ouarzazate region in central Morocco, for example, the annual average daily global irradiation on a horizontal surface varies from 3.86 to 7.85 kWh/m2, which means an annual average of 7.9 to 11.2 hours of sunshine per day. Concerning the wind potential, the annual average wind speed, at 10 meters above sea level, for the Tangier zone in the north is 10m/s, but for the Dakhla zone in the Laâyoune-Sakia El Hamra region, it varies between 7 and 8.5 m/s.

Morocco imports more than 96 percent of its energy needs and its electricity consumption increases by about 8 percent per year. For this reason a new energy strategy was adopted in 2009. It is based mainly on the increase in the contribution of renewable energies to national electricity consumption and the development of the clean energy economy. This will enable Morocco to reduce its energy bill and its dependence on energy from abroad, in addition to the limitation of its greenhouse gas emissions, thus contributing to the preservation of the environment.

This strategy has been translated into a road map with specific objectives and detailed work programs in the short and medium term. Morocco has also developed a strategic vision of energy efficiency and resource optimization aimed at achieving a 20 percent less consumption of energy by 2030. This strategy targets the most energy-intensive sectors, in particular transport, building and industry, as well as agriculture and public lighting.

Since 1945, the construction of dams has been the primary orientation of water management in Morocco. The hydroelectric sector has also been particularly important since 1960. The contribution of installed hydroelectric power (1800 MW), which depends on rainfall, is between 5.1 percent and 13.7 percent of the net electricity consumption.

In 2009, a large-scale solar energy use strategy was launched by the creation of the “Moroccan Renewable Energy Agency” (MASEN), which has become the “Moroccan Agency of Sustainable Energy” (MASE), to develop renewable energies, particularly solar, wind and hydro, and to promote regional integration between sub-Saharan Africa, European and Arab countries, while strengthening the links with the main players in this sector on a world-wide basis. Thanks to its model of sustainable development, its objective to exploit renewable energies and its openness to world trends in the electricity market, Morocco will be able to identify the latest innovations, energy efficiency and clean technologies. Due to these objectives, Morocco is moving towards the completion of the second phase of the “Noor” solar energy program, by installing another series of multi-technology solar power plants in Midelt, Tata, Lâayoune and Boujdour.

The solar power plant “Noor-Ouarzazate” (580 MW), one of the largest solar energy complexes in the world, is the first solar energy project piloted by MASE. It consists of four multi-technology solar sub-plants, which will be developed in full compliance with international standards, both technologically and environmentally, and associated with a research platform. Among the concerns and objectives of MASEN, there are also:

In Morocco, the strategy for using solar energy for large-scale electricity generation was launched in 2009. The first power plant (472 MW), incorporating 20 MW of solar power, was built in 2010. It is a Solar-Natural Gas Hybrid Plant. The second giant solar power station “Noor I” (160 MW) was built in 2016 in Ouarzazate. It uses concentrated solar power (CSP) technology, with a three-hour electricity storage capacity, which will be used during peak hours. A second (200 MW) and a third (150 MW) section of the solar power plant “Noor-Ouarzazate,” using the same CSP technology, with a solar thermal tower and heliostats only in the third section, but with a storage capacity of seven hours, are in the installation stage.

In recent years, the renewable energy consumption in Morocco has become significant and is constantly growing, reflected by the beginning of the construction of the fourth and final section (70 MW) of the “Noor-Ouarzazate” solar power plant, which uses photovoltaic technology. This allows the production of electrical energy directly from solar radiation captured by semiconductor cells.

The completion of the construction of this section, which will be operational by the end of 2018, is within the framework of a partnership between MASE, the main actor in the sector of the exploitation of renewable energies in Morocco and a consortium of private operators, headed by the Saudi group “Aqua Power,” after an international tender.

Morocco has also embarked on the installation of another series of clean energy projects with a capacity of more than 1,200 MW. Its completion will permit Morocco to take up the first place in Africa in this sector.

The Moroccan electricity plan foresees the realization of an additional capacity of approximately 7,249 MW to meet the demand, which should increase by an average of 5.1 percent per annum over the period 2017 to 2021. Renewable energies represent more than 74 percent of this total capacity, that is to say, equivalent to 5,403 MW: 356 MW for wind, 3,425 MW for solar and 622 MW for hydro.

Morocco, with this energy policy, opens up new horizons for the future of clean energy in Africa. Its strategy includes, in addition to the development of solar thermal, photovoltaic and wind energy, the introduction of a series of legislative, regulatory and institutional reforms, while improving tax benefits to encourage investment in this sector. Moreover, starting from 2015, for a rapid and successful energy transition, it will have increased the share of renewable energies to 52 percent of its installed electricity capacity by the year 2030. This requires the development of new additional capacity of renewable energy of about 11 GW and a total investment estimated at US$30 billion.

Morocco also considers itself to be one of the most active African countries for investment in this sector. This makes it one of the pioneering African countries and it is among the first in Africa in the solar energy sector and in the second position for wind energy. It also managed to break through the 1,000 MW threshold in wind power installed in 2017, overtaking Egypt and approaching the level of South Africa, which installed 1,582 MW. It also plays a leading role in African development through training and experience provided for a range of African countries.

Renewable energy programs and projects in Morocco are arousing an increasing interest from international and local investors, allowing Morocco to attract more investment in this sector, such as the installation of an industrial unit of the group German Siemens, with an investment of nearly 100 million Euros for the manufacture of wind turbine blades in Morocco.

Morocco also aims, through the exploitation of its natural renewable energy resources, to contribute to the preservation of the environment and the assurance of the durability of its economic and social development. In addition to the guarantee of a clean earth for future generations, Morocco should comply with its international commitments made at COP22 in 2016 in Marrakech, within the framework of the Climate Change Agreement adopted in Paris in 2016 to reduce greenhouse gas emissions, mainly carbon dioxide.

The massive exploitation of renewable energies in Morocco, which comes within the framework of the international commitments of Morocco relating to the reduction of greenhouse gas emissions, allows it to reduce its consumption of fossil, unlike Algeria, Egypt, Libya and Tunisia, where the consumption of oil and natural gas dominates at more than 90 percent. It has also set itself a strategic goal by building an electricity transmission line to Spain and Italy, to become the EU’s first sustainable clean electricity supplier and to begin to be a regional center for the export of competitive clean electricity to its neighbors.

The construction of more than 5,000 km of gas pipeline connecting Nigeria, Africa’s third largest gas producer, and Europe through Morocco is essential. Gas is less of a pollutant than coal and oil. The realization of this important economic and social project will strengthen Morocco’s relations in Africa and in Europe. This strategy gives credibility to its economic policies and creates confidence in its North African diplomacy.

According to a study conducted by a group of researchers, led by Wolfram Schlinker, Professor of Economics at the University of Columbia, the rapid rise in global warming could triple the number of migrants arriving in the EU by 2100, because of a sharp rise in temperature, in addition to the other factors that force people to leave their countries, such as war and persecution. Morocco’s contribution, through the increasing use of more renewable energy, could limit the numbers of immigrants from sub-Saharan Africa.