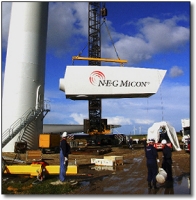 To say that wind turbines have been growing in size within the past few years, would be a drastic understatement. Multi-MW machines, taking advantage of economies of scale, have been the design focal point for many wind turbine manufacturers. NEG Micon, which already produces multi-MW machines has announced a new behemoth — a 4.2-MW unit.

Høvsøre, Denmark – October 21, 2003 [SolarAccess.com] NEG Micon has erected the new wind turbine in Denmark at Risø National Laboratory’s test site at Høvsøre. The turbine, NM110, is a prototype of NEG Micon’s new 4.2-MW offshore turbine featuring Pitch Regulated Variable Speed (PRVS), and will be the largest wind turbine installed in Denmark, according to the company. With its massive electrical capacity and a 110-meter rotor diameter, NEG Micon’s machine is directed towards meeting the increasing demand for high-capacity offshore turbines. The company said it’s also one of the lightest in its class, and thanks to its relatively low weight and special offshore properties it fully meets the future demands for more cost-efficient offshore wind turbines. “Offshore wind farms are typically large-scale projects exceeding 100 MW. High generator capacity is therefore just one of several essential properties when considering offshore turbines of the future,” said sOle Gunneskov, NEG Micon’s Development Director. “The fewer the number of turbines erected at a wind farm, the less the costs for foundations and installations. The overall economy of the offshore project will be improved, and the cost per produced kWh will thus be reduced in the course of the lifetime of the project.” Ole Gunneskov said that the NM110 is based on well-known and proven technology, as the turbine is basically identical to NEG Micon’s NM80 and NM92 turbines for on- and offshore sites. The NM110 thus represents an evolutionary rather than a revolutionary technological development, and Ole Gunneskov thus expects the prototype to pass the tests that it must now undergo without problems, so that the turbine will be released for series production within a year. With a combined nacelle and rotor weight of 214 tons, NM110 is one of the lightest in its class, according to the company. Ole Gunneskov added that the weight of the turbine is another essential factor for the overall economy of an offshore project and the loads to which the turbine will be exposed in the course of its lifetime. “Even though 214 tons may sound a lot, the NM110 is in fact one of the lightest turbines in its class,” Gunneskov said. “This is very important for the project economy, as the transport and installation costs can be significantly reduced. But the relatively low weight also means a reduction of the loads to which the turbine is exposed.” “We have not compromised either the high-tech design or the high quality of our turbines – on the contrary,” Gunneskov said. “Our ability to successfully develop a large turbine with such a relatively low weight, is the fruitful result of many years of innovation and experience.” Offshore sites involve special demands for reliable operations and thus reduced service and maintenance requirements. A lot of attention has been paid to these factors in the development of the NM110, said the company. “In general, NEG Micon’s turbines have a very high availability factor, and for offshore turbines reliable operation is an absolute requirement,” Gunneskov said. “An offshore turbine is as such less accessible and thus relatively more expensive to service. Reliable operation was therefore one of the mandatory requirements which the NM110 had to meet.” Wind turbines are now ranking on a par with power plants. This increases the requirements with regard to the grid functionality of the turbines and thus also for the technology. The NM110 is controlled using PRVS which, together with the advanced power output electronics, ensures that the turbine is able to meet the requirements made by system operators and utilities for grid stability and quality, said the company. “The major challenge is the blade pitch system,” Gunneskov said. “PRVS ensures, among other things, a soft grid cut-in and fast regulation in the event of grid drop and changes in output demand. The NM110 thus fully meets the requirements which have been set.”