Integration was one of the greatest achievements of the 20th century, from Martin Luther King’s courageous fight in the 1950s South to Lech Walesa’s fight to bring 1980s Eastern Europe into the free world to Nelson Mandela’s 1990s heroic triumph in South Africa. Without meaning to belittle those magnificent efforts, the world is now engaged in a so-far non-confrontational struggle for integration that could have even more far reaching and longer lasting impacts than any of those awesome struggles.

The easiest way for opponents to discredit the New Energies is to dismiss them as intermittent. Burners use the apparently intuitively obvious fact that the sun and the wind come and go to argue they are unrealiable sources of energy. What is intuitively obvious, however, is not necessarily the same thing as true.

Though sun and wind are intermittent, they are not unpredictable or unreliable sources of power generation. They only require grid operators to “work a little harder” to effectively integrate them into the existing transmission system. The price of such work is a marginal increase in the cost of transmission that adds marginally to the cost of electricity. The pay-off is that the New Energies can then play a bigger and more important role in the generation of domestically harvested, emissions-free electricity that increases U.S. jobs and reduces the flow of U.S. money to foreign countries.

Nebraska Statewide Wind Integration Study, by the Nebraska Power Association and funded by the U.S. Department of Energy (DOE) National Renewable Energy Laboratory (NREL), shows that it is possible for the people served by the Southwest Power Pool (SPP) transmission system to get as much as 40% of their electricity from wind energy at no loss of reliability and no prohibitive increase in cost. ::continue:: 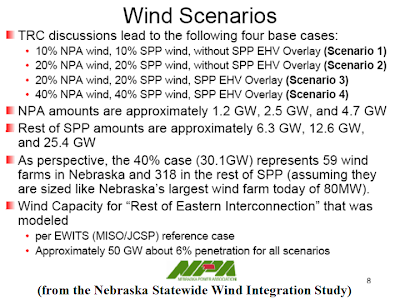 Obtaining more electricity from wind will require the SPP transmission system operator to effectively integrate a wide range of wind generation sources and to integrate that into the electricity supply. The paper evaluated scenarios in which the SPP obtains 10%, 20% and 40% of its electricity from wind in 2018. This represents 1,249-to-4,7272 megawatts in 2018, when there will be an expected 8,700 megawatts of total generation. The study of 40% wind is the highest level of wind integration ever studied in such detail for any transmission system anywhere.

Though the intermittency of wind is less significant because of the increasing accuracy of next-hour and next-24-hours forecasts, integration costs are due to the basic fact that the production costs of maintaining high reliability for “actual” wind (because of forecast error, the need for incremental fossil fuel reserves and wind variability) are higher than predicted in “ideal” cases (where there is no forecast error, etc.).

The study used 4 major scenarios and more than 15 primary cases covering a wide range of variations. The cost of integration varied, depending on the method used. The integration of 10% wind could cost as little as $1.39 per megawatt-hour (MWh), or as much as $3.21/MWh and 40% could cost as little as $1.68 per MWh or as much as $5.41/MWh (if the SPP is required to fund the burden of exporting wind to other power system regions in the 25-state Eastern Interconnection). But these costs are much lower than found by previous studies and amount to no more than a 10% increase in the price of electricity.

Clearly the technology is available, the need is great and the time has come to give the New Energies their civil rights and fully integrate them into the world’s power supply. 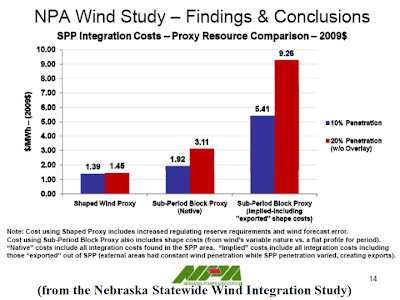