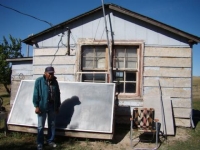 The recent economic crisis has hit much of America extremely hard, but the effects can be seen even more drastically on tribal lands. Counties on Native American reservations are among the poorest in the country, in part due to lack of economic opportunity. Some estimates put the average unemployment rate on Native American reservations around 70 percent.

Debby Tewa, a solar electrician from the Hopi Reservation, agrees. “When leaders say this will bring jobs to our tribe,” says Tewa, “I ask what do you mean by jobs?” Tewa, who now runs a consulting company called Tewa Energy Services to educate the tribes on their renewable energy options and help get them job ready, says tribes need to realize what kind of jobs these large renewable installations bring. “These installations need engineers, managers, and many other positions other than laborers,” she says. “There’s no reason those positions can’t be filled by Native Americans.”

The Pine Ridge reservation, home of the Oglala Lakota in southwestern South Dakota, is one of thepoorest communities in the United States. Winters can be frigid, and utility bills to heat poorly insulated homes are exorbitant. Lakota Solar Enterprises (LSE), along with TWP, are installing solar heating systems on homes on the reservation, saving families 20 to 30 percent of their monthly heating costs for up to 20 years. More than 900 of these systems are now installed on Pine Ridge and other reservations around the country. They not only save people money and keep them warm, but also provide much-needed jobs.

Henry Red Cloud started Lakota Solar Enterprises in 2006 as the nation’s first 100-percent Native-American-owned and -operated renewable energy company. In 2007, LSE expanded and started the Red Cloud Renewable Energy Center, an educational facility where tribes from around the nation can receive training on solar electricity, solar heating systems, wind power, and sustainable building. The center has six to eight training sessions a year, lasting from one to three weeks. Many of the trainees become certified solar technicians working on their own reservations, with some even starting their own renewable energy businesses.

Not only do the students learn about the technology, but last August TWP and LSE held the first Native American Green Business Development Training, which gave students the necessary training and tools to tackle the challenges of starting a business on reservations, including outlines for a business plan, and how to come up with a start-up and operating budget. This year they will add an annual Green Business Plan Competition, with the winner receiving up to $40,000 in start-up funding and assistance.

Bob Gough, secretary of the Intertribal Council on Utility Policy (Intertribal COUP), agrees about the more limited job opportunities of utility-scale projects. “There’s a flurry of construction; that’s where the jobs are,” he said. “There aren’t necessarily a lot of direct jobs once the system is up.” That’s why Intertribal COUP is moving focus more to job creation through sustainable building.

In 2003 the U.S. Commission on Civil Rights estimated that 200,000 houses were needed immediately in Indian country. According to Gough, the median age on reservations is under 20. “We have Third World demographics, we know that in 20 years half the reservation population will move from underage to adults,” Gough told RMI. “What are these young people going to need? Jobs and homes.”

There is also a large problem with houses on reservations being infected with black mold, many of which need to be burned down and rebuilt, which makes for a huge housing crisis. To confront these issues, Intertribal COUP and others have been training Native Americans to build high-performance straw bale homes.

Straw bale houses are extremely energy efficient and can be built with local natural materials. “We have a large housing crisis that could be a large home-building opportunity,” said Gough. “Finding a way to employ people by building quality high-performance homes not only serves the housing need, but also deals with the poverty, unemployment, and health issues that the Native community faces.”

One of COUP’s latest projects is to develop training for returning Native veterans to do “nation building at home,” getting them re-engaged and re-socialized in the community through building homes with natural materials. While it’s easy to train people in straw bale construction, there are currently no local straw bale construction companies to hire them. So COUP’s goal is not only workforce training, but also encouraging Native-owned construction companies on the reservations to include such natural building technologies.

And there’s another plus for building high-performance homes—an efficient home is much easier to power with community-based renewable energy. “Tribes have a great opportunity to really make a difference,” Gough told the Friends Committee on National Legislation. “Tribes can programmatically address their housing needs and address their unemployment needs and at the same time address their energy needs… If we could meet the present need for new homes and replace a good deal of the existing Indian housing in the next 20 or 30 years with energy-efficient homes, these reservations would hum as models, as islands of sustainability, as shining stars of passive and efficient survivability.”

Henry Red Cloud also believes that tribes can live sustainably through renewable energy. Red Cloud, the direct fifth-generation descendent of Chief Red Cloud, one of the last Lakota war chiefs, says, “I see myself as a twenty-first century Lakota Warrior, bringing social justice and economic development to Native American communities through renewable energy…This is a new way to honor the old way.”