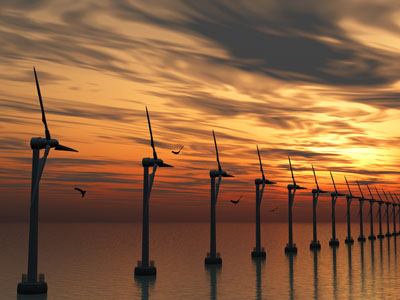 National Grid said June 30 that a few days before, a 20-mile undersea cable between the Rhode Island mainland and Block Island came to shore.

“This significant milestone in developing renewable offshore wind generated energy is the result of years of work by hundreds of people,” said Rudy Wynter, president and COO of National Grid’s FERC regulated businesses. “Everyone involved in this project can be proud of what has been accomplished.”

The cable will bring power created by the five-turbine Deepwater Wind Block Island Wind Farm project located just off the island to the mainland power grid. The undersea cable was installed between Scarborough State Beach in Narragansett, R.I., and Crescent Beach on Block Island. The cable will ultimately be connected to a new National Grid substation being constructed on the island and to an existing substation in Wakefield, R.I., on the mainland.

The same cable will also interconnect the privately-owned Block Island Power Co. (BIPCo) to the mainland. Until now the island’s electric power needs were met through diesel-powered generation.

Once the system is energized, National Grid will purchase the output from the Deepwater Wind Farm through an agreement approved by the Rhode Island Public Utilities Commission and feed the power into the regional transmission system. BIPCo will purchase its power through the energy markets. A portion of that power will include output from the Deepwater Wind Farm.

“We still have several months of construction work and testing to complete before the system can be energized,” said Wynter. “We’re continuing to work closely with Deepwater Wind, BIPCo, the towns of New Shoreham, Narragansett, South Kingstown as well as state, local and federal permitting agencies to complete the project this fall.”

The nearly five-million pounds of undersea cable that connects the Deepwater Wind Farm to the island and the island to the mainland was manufactured in South Korea by LS Cable, which was also the company overseeing the installation of the cable for National Grid and Deepwater Wind.

Connecting the undersea cable to newly installed underground cable on the island will be completed imminently. Underground duct banks through which connecting electric cables will run have been installed in Narragansett, South Kingstown and on Block Island and approximately 90% of the underground cables are in place. Cable splicing, overhead line, and substation construction will continue over the summer months. Substation testing and commissioning is scheduled to begin after Labor Day.