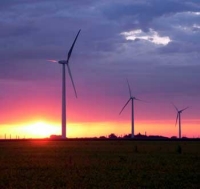 The 100 MW wind energy development near Jackson, Minnesota, is expected to generate renewable energy equivalent to the annual electric consumption of 29,000 homes served by Great River Energy’s 28 member cooperatives. “The Trimont Area Wind Farm is an excellent fit for Great River Energy. Not only does it provide us with clean, renewable energy it also is a local project situated right in Great River Energy’s service territory,” said Rick Lancaster, vice president of generation for Great River Energy. “This project also brings us closer to our commitment to reach the 10 percent renewable objective by the year 2015.” The Trimont Area Wind Farm (TAWF) consists of 67 General Electric wind turbines situated on approximately 8,900 acres of farmland. TAWF was launched by a coalition of 43 landowners in Jackson and Martin counties. The group responded to a Great River Energy request for proposals in 2003. TAWF was selected because of its competitive price, its access to interconnection facilities, and its ability to deliver the power to Great River Energy’s member cooperatives. Subsequent to TAWF’s selection by Great River Energy, TAWF chose PPM Energy to develop, build and operate the project on its behalf. Part of the ScottishPower group of companies, Portland, Oregon-based PPM Energy has more than 1,600 MW of wind power under its control in operation or under construction, putting it well on its way toward its goal of bringing 2,300 MW of new wind power to market by 2010. “Commercial operation is a milestone event at every wind farm. At Trimont, the construction team worked over the Thanksgiving holiday and in blizzard conditions during the final 24 hours to complete turbine commissioning,” said Raimund Grube, managing director of PPM’s Midwest Wind Business. “We are delighted to bring online clean, renewable energy just as winter energy needs increase.” While TAWF output brings the renewable content of Great River Energy’s energy portfolio to approximately 5 percent, this project provides more benefit to landowners than the typical wind project. Landowners benefit from revenue participation, as well as from traditional easement payments. In addition, production tax revenues from the project for Jackson and Martin counties are expected to range from $350,000-$400,000 annually.