More
Home Blogs MidEast Wasting Potential as Big as the Sun, as Strong as the...

In 1950, the Arabian-American Oil company (made up of the oil companies that became today’s Exxon-Mobil and Chevron-Texaco, among others) ran into a problem. They couldn’t keep their profits high if they were forced to pay what the Saudis wanted for their oil and what they owed the U.S. government in taxes. So, Big Oil being the kingmakers it is in the U.S. political system, arranged something called “the golden gimmick.” It allowed them a 50% cut in federal taxes on their profits so they could meet Saudi King Ibn Saud’s price.

In the 1970s, U.S. domestic oil production peaked and started falling off and the potentates began using their oil to manipulate political events. It created the opportunity for some visionary scientists who had been playing with something called “photovoltaics” that turned the light of the sun into electricity (photo=light, voltaics=volts of electricity) to get a word in edgewise. “How about using the energy of the sun and forget about oil?” they asked.

At the time, U.S. consumer/taxpayers happened to be – due to the potentates’ greedy oil price manipulations – waiting in long gas station lines. They had the time to grudgingly consider the scientists’ suggestion and the longer they waited in line, the more they liked the idea of photovoltaics.

Flash forward almost 4 decades, two MidEast wars, two World Trade Center attacks and one psuedo-clash of cultures later. A lot more people like the idea of the sun and very few outside the oil and gas industry who know about the golden gimmick and other Big Oil tax fiddles think they should stay in place. ::continue:: 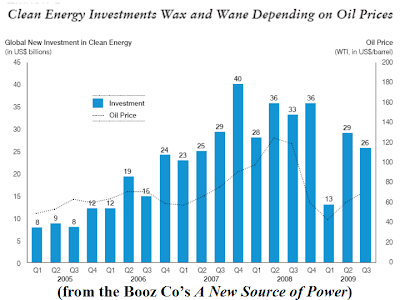 In the MidEast, oil supplies are peaking and falling off in some countries and threatening to in others, cities are growing polluted, aggravated heat from global climate change is becoming intolerable, single commodity economies are narrowing and failing from the “oil curse” and the entrenched oil industries are not supplying enough work for burgeoning populations. Suddenly, there are a lot of people – even some in the royal families and privileged few with oil riches – who are looking up at the sun and wondering if its energy has something better to offer.

A New Source of Power; The Potential for Renewable Energy in the MENA Region, by Ibrahim El-Husseini, Dr. Walid Fayad, Tarek El Sayed and Daniel Zywietz for Booz & Co., say it does.

The offer: The 146-gigawatt power capacity of the combined MidEast/North Africa (MENA) nations will need to expand by at least 80-to-90 gigawatts by 2017. They can make the situation worse by expanding their dependence on fossil fuels or they can turn toward the future and develop their unmatched solar and other New Energy resources to meet this coming need.

The way: MENA nations have an estimated 45% of total world New Energy potential and practically none of its installed capacity. Besides the world’s biggest solar potential, MENA nations have substantial wind. Now being squandered, MENA New Energy could meet current world electricity demand three times over. To turn toward the future, all they have to do is turn away from golden gimmicks and step into the golden light of their sun and the richness of their winds. 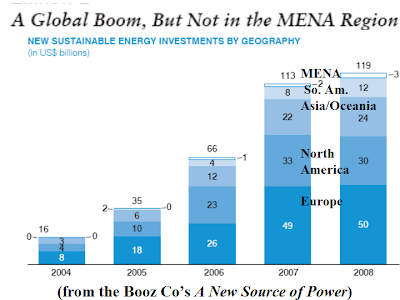 This post is based on Report finds MENA region lagging on renewable power by Tamsin Carlisle (March 14, 2010, The National) and A New Source of Power; The Potential for Renewable Energy in the MENA Region by Ibrahim El-Husseini, Dr. Walid Fayad, Tarek El Sayed and Daniel Zywietz (March 2010, Booz & Co.)