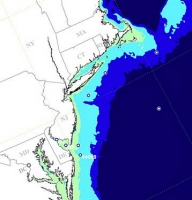 The wind resource off the Mid-Atlantic coast could supply the energy needs of nine states from Massachusetts to North Carolina, plus the District of Columbia — with enough left over to support a 50 percent increase in future energy demand — according to a study by researchers at the University of Delaware (UD) and Stanford University.

Willett Kempton, Richard Garvine and Amardeep Dhanju at the University of Delaware and Mark Jacobson and Cristina Archer at Stanford, found that the wind over the Middle Atlantic Bight, the aquatic region from Cape Cod, Mass., to Cape Hatteras, N.C., could produce 330 gigawatts of average electrical power if thousands of wind turbines were installed off the coast. The estimated power supply from offshore wind substantially exceeds the region’s current energy use — which the scientists estimate at 185 gigawatts — from electricity, gasoline, fuel oil and natural gas sources. The study marks the first empirical analysis in the United States of a large-scale region’s potential offshore wind-energy supply using a model that links geophysics with wind-electric technology — and that defines where wind turbines at sea may be located in relation to water depth, geology and “exclusion zones” for bird flyways, shipping lanes and other uses. Kempton, the UD professor of marine policy who led the study, has worked on several public opinion surveys about offshore wind power over the past three years, including a survey of Cape Cod residents, who largely have opposed a major wind farm proposed for their coastal area, and a more recent survey in Delaware that revealed strong support for offshore wind power as the next electricity source for the state. “In doing our surveys and watching the public debate, we saw that no one had solid empirical data on the actual size of the offshore wind resource, and we felt this was important for policy decisions,” Kempton said. Estimating the wind power resource The scientists examined current wind-turbine technologies to determine the depth of the water and the distance from shore the wind turbines could be located. They also defined “exclusion zones” where wind turbines could not be installed, such as major bird flyways, shipping lanes, chemical disposal sites, military restricted areas, borrow sites where sediments are removed for beach renourishment projects, and “visual space” from major tourist beaches. To estimate the size of the wind power resource, the researchers needed to figure out the maximum number of wind turbines that could be erected and the region’s average wind power. The spacing used between the hypothetical wind turbines was about one-half mile apart. At a closer spacing, Kempton said, upwind turbines will “steal” wind energy from downstream ones. Anemometer readings from the nine NOAA weather buoys in the Middle Atlantic Bight were analyzed. To determine the average wind over the region, the scientists reviewed all the wind-speed data from the past 21 years from one of the buoys. The findings were then extrapolated to the height of the offshore wind turbines currently being manufactured in order to determine the average power output per unit. At the current 80-meter (262-foot) wind turbine height, the extrapolated wind speed of the mid-range buoy is 8.2 meters per second (18.3 miles per hour or 16 knots). The scientists’ estimate of the full-resource, average wind power output of 330 gigawatts over the Middle Atlantic Bight is based on the installation of 166,720 wind turbines, each generating up to 5 megawatts of power. The wind turbines would be located at varying distances from shore, out to 100 meters of water depth, over an ocean area spanning more than 50,000 square miles, from Cape Cod to Cape Hatteras. In comparison to the oil and natural gas resources of the Atlantic Outer Continental Shelf — the submerged land that lies seaward from 3 miles offshore and is under federal jurisdiction — the researchers found that the shelf’s reported energy sources would amount to only one-tenth of the wind resource and would be exhausted in 20 years. Addressing wind power fluctuations and energy priorities While 330 gigawatts is the average output of the entire offshore wind resource over the Mid-Atlantic Bight, the researchers note that offshore wind is not uniform and offer suggestions for addressing power fluctuations. “Over a large area like this, the wind blows stronger at some times and places, weaker at others,” Kempton said. To make wind power more uniform, the study shows that multiple sites could be connected through power lines to reduce the number of times of both maximum and minimum power. Changes in new and replacement energy-using devices, including automobiles, also could provide for greater power storage. “Battery and plug-in hybrid automobiles, for example, have large storage that is unused when the car is parked,” Kempton said. With a scientifically reliable estimate of the region’s offshore wind power potential now in hand, how likely are we to actually install more than 100,000 wind turbines off the Mid-Atlantic coast? “Today, market forces and incremental technology developments will gradually make offshore wind the least-cost power in more and more East Coast locations,” said Kempton. “On the other hand, if climate change becomes a much greater priority for the United States, our study shows how we could displace more than half the carbon dioxide emissions of the Mid-Atlantic area quickly, using existing technology.” On the practicality of producing 166,720 wind turbines, co-author Richard Garvine noted, “the United States began producing 2,000 warplanes per year in 1939 for World War II, increased production each year, and, by 1946, had sent 257,000 aircraft into service.” “We did that in seven years, using 1940s technology,” he said. Tracey Bryant is assistant director for research communications at the University of Delaware. This article was reprinted with permission from the University of Delaware.