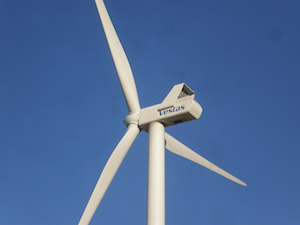 MHI Vestas Offshore Wind A/S, the world’s second-biggest offshore wind turbine maker, is planning to use Taiwan as a hub to assemble and export turbines as it aims to extend its footprint in Asia.

Taiwan has emerged as a hot spot for offshore wind as President Tsai Ing-Wen works to phase out nuclear energy while adding 25 gigawatts of renewable energy by 2025. The island is seeking to increase offshore wind capacity to 5.5 gigawatts over the same time frame, from just 8 megawatts.

“For us, Taiwan will be an excellent platform for export to Southeast Asia” because of Taiwan’s push for offshore wind power and the proximity to markets such as Vietnam, said Philippe Kavafyan, chief executive officer for the venture between Mitsubishi Heavy Industries Ltd. of Japan and Denmark’s Vestas Wind Systems A/S, in an interview in Tokyo on June 29.

The Aarhus, Denmark-based turbine maker for offshore-wind projects announced this year that it will work with Taiwanese manufacturers including Tien Li Offshore Wind Technology Co. and China Steel Machinery Corp. for the supply of turbine blades, towers and materials.

“We don’t really plan to open our own factory,” Kavafyan said, adding such a plant will be set up by local partners. “Over time, there is a full plan to industrialize components and subsystems to increase the content we will do in Taiwan.”

MHI Vestas, the biggest after Siemens Gamesa Renewable Energy SA, has been picked as a preferred supplier for Taiwanese offshore wind projects being developed by Copenhagen Infrastructure Partners as well as China Steel Corp. with a combined capacity of at least 900 megawatts, according to Kavafyan.

MHI Vestas is also part of a consortium that aims to develop as much as 600 megawatts of offshore wind by 2021 in Vietnam, according to Chief Strategy Officer Masato Yamada.

Meanwhile, MHI Vestas sees continued growth in the European market with Poland and the Baltic nations emerging as new markets, Kavafyan said. The company is also considering similar partnership in the U.S. where a series of large-sized offshore wind projects are planned.