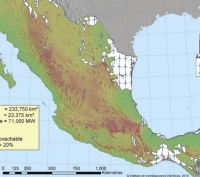 Hermosillo, Sonora — Developers familiar with Mexico’s rapid installation of wind power projects are predicting that the country can ramp up from 1,000 MW of current capacity to as much as 12 GW by 2020. The prediction was made at 19th Annual Border Energy Forum, organized here last week by the Texas Land Office, by Pablo Gottfried Blackmore, a member of the directors council of the Asociación Mexicana de Energía Eólica, the country’s national wind trade group. Others at the forum, including Mannti Cummins, the wind energy director for American Shoreline Inc., also echoed bullish predictions for the country’s wind potential.

“Our goal is 12 GW, and the Secretaria de Energia already has adopted that number,” Blackmore said. “Studies we have analyzed seem to agree that there is 20 GW of wind potential in Mexico that would be competitive with gas prices,” he added. “It is critical to bring in the small producers to reach this goal, however,” he said.

Mexico’s high electricity rates make wind development at parity with fossel fuels. “We have no feed in tariffs here, but we do have high electrical rates, which encourages the industry,” Blackmore said. Mexico’s national electricity agency, Comision Federal de Electricidad, has been signing power purchase agreements with renewable energy producers at rates around 20 cents per kilowatt-hour, and corporate consumers are said to be eager for wind PPAs. “There are 17 investment-grade companies in Mexico, and 7 have wind projects underway,” Cummins added.

Cummins was only slightly less optimistic in his GW prediction for Mexico: “We should be adding 4,000 MW of capacity over the next four to five years,” he reckoned. “This will be the Saudi Arabia of wind,” he suggested. Within Mexico, his company, based in Corpus Christi, Texas, is focused on the offshore wind market in the northeast corner of the country, where there are high Gulf winds and large cities nearby. Only in Oaxaca state, on the southeast corner of the country, is there higher wind potential. AWS Truepower, of Albany, New York, released a high-resolution wind map and data for Mexico in March this year, which details this potential.

Financing wind projects in Mexico that are relatively close to the border can be facilitated by the North American Development Bank (NADB), which is backing the Ocotillo wind project in Imperial County, California.

“We can provide 55 percent to 70 percent of the cost of a project, with the rest coming from equity investors, the EPC contractors and the equipment providers,” noted Jose Ruiz, the director of project development for the San Antonio-based bank. “We have several more wind projects in the works,” he added. Among other tasks, the NADB is mandated to support renewable energy development along the U.S.-Mexico border under the terms of the North American Free Trade Agreement.

Risk for wind project developers may be higher in Mexico than in Texas, in terms of siting, permits, grid interconnections and PPAs, but the difference in electricity rates — which are double in Mexico compared with Texas — makes it worth while, suggested Cummins. “International companies have come here and said ‘we see more potential project risk in the United States than we do here,'” he said.