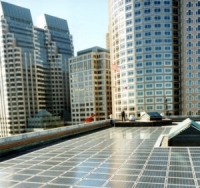 Boston, United States [RenewableEnergyWorld.com] A comprehensive energy policy that includes the development of renewables and energy-efficiency efforts is now a reality in the state of Massachusetts. Governor Deval Patrick signed the Green Communities Act on Wednesday, July 2. The bill includes provisions to encourage the development and use of renewable energy and energy-efficiency measures, both on a utility and residential level, through a number of programs and incentives.

“This new law puts Massachusetts in the lead nationally in crafting bold, comprehensive energy reform,” said Massachusetts House Speaker Salvatore DiMasi. “This law will spark a significant increase in the use of renewable energy that will significantly curtail our use of fossil fuels, improve our environment and save us all money in the long run.”

Barbara Hill, Executive Director of Clean Power Now, the group pushing to bring Cape Wind, an offshore wind farm to be located outside Nantucket Sound, welcomed the signing of the bill.

“This new bill provides much of what the overwhelming majority of Massachusetts citizens have been asking for — to make the Bay State a national clean power leader.  Bravo to everyone who worked so long and hard to bring this to the Governor’s desk for signing,” Hill said.

The law also includes a widening of the state’s already existing net-metering provisions. The new policy will make it possible for people who own wind turbines or solar systems that generate power to sell their excess electricity into the grid for installations of up to 2 megawatts (MW). This is an increase over the state’s current net-metering cap of 60 kilowatts (kW). The measure also allows utility companies to offer up to 50 MW of power-purchase agreements (PPAs) to residential and commercial customers over the next two years, subject to approval by the Massachusetts public utilities commission. PPAs enable third-party ownership of solar electric installations.

“The fact is that we’re looking to develop this program through Commonwealth Solar. We now letting utilities get into that game,” said Bob Keough, Assistant Secretary for Communications and Public Affairs of the Massachusetts Executive Office Of Energy and Environmental Affairs.

In addition to the net-metering and project development sections of the bill, the new energy law doubles the rate of increase in the Renewable Portfolio Standard (RPS) from 0.5 percent per year to 1 percent per year, with no cap. As a result, utilities and other electricity suppliers will be required to obtain renewable power equal to 4 percent of sales in 2009. This number will rise to 15 percent in 2020 and 25 percent in 2030.

“With this legislation, Massachusetts takes its rightful place as a national leader in energy reform and environmental protection,” said Ian Bowles, Secretary of Energy and Environmental Affairs for Massachusetts. “This legislation will help businesses and residential consumers fight rising energy costs, reap the benefits of renewable energy and grow our clean energy industry.”

Under the The Green Communities Act, the state will encourage energy efficiency programs in order for them to compete in the open market with traditional energy supply. Utility companies including NSTAR, National Grid and Western Mass. Electric will be mandated to make all cost-effective energy-efficiency improvements available to them. This could ultimately save money for both utility companies and consumers.

Utility companies will also offer rebates and other incentives for customers to upgrade lighting, air conditioning and industrial equipment to more efficient models, provided that those incentives are less expensive than generating the electricity it would take to power the older, less-efficient equipment. Existing efficiency programs have already shown savings at US $0.03 per kilowatt-hour (kWh) versus US $0.09 for power generation.

“It’s been close to a year and a half of work to get this legislation passed. This bill was originally filed by the house speaker in April of 2007. There are a lot of moving parts and there have been a lot of compromises, but we now have legislation that we are really proud of,” Keough said. “This is really a game-changer in the State of Massachusetts.”