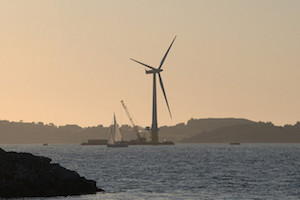 Hywind Scotland is a 30 MW wind farm in the North Sea which Statoil has been developing for several years.

The collaboration with Masdar was announced today at an official ceremony during Abu Dhabi Sustainability Week.

The deal will see Statoil and Masdar share the development risk and Masdar will cover 25 percent of previous and future costs.

Due to start commercial operation in late 2017, Hywind Scotland would be the world’s first floating offshore wind farm. It consists of five 6 MW floating wind turbines anchored to the seabed. The farm covers an area of around four-square kilometers.

Statoil’s executive vice president for new energy solutions, Irene Rummelhoff, said she believed “Masdar can be a strong partner also in future Hywind projects, and we hope that our collaboration will result in future value creation opportunities for both parties.”

Hywind Scotland is the second offshore wind partnership between Masdar and Statoil following the Dudgeon wind farm, a 402-MW project in the UK also due to come online by the second half of 2017.