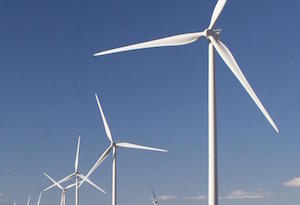 Anyone in a March madness pool for the NCAA tourney knows predicting the future is a challenge. On the college basketball court, the only certainty is uncertainty — until the final buzzer declares a champion (congratulations this year to Villanova and Notre Dame). In energy forecasting, many analysts haven’t fared much better, consistently underestimating prospects for clean power in their long-range models. The marketplace, fortunately, does better. It picks winners based on actual points scored — on price, reliability, jobs and what works best for customers.

Through March 2018, wind and other renewable energies have continued to put up points that highlight their sustained growth and momentum in the marketplace. Energy markets — and the business leaders driving them — understand what shapes America’s energy future. Clean power is posting new milestones as business leaders, customers and policy makers affirm their confidence in its role and value as a new mainstay in the U.S. energy mix.

U.S. energy markets are continuing to trend wind, with numbers that make a compelling business case for customers: 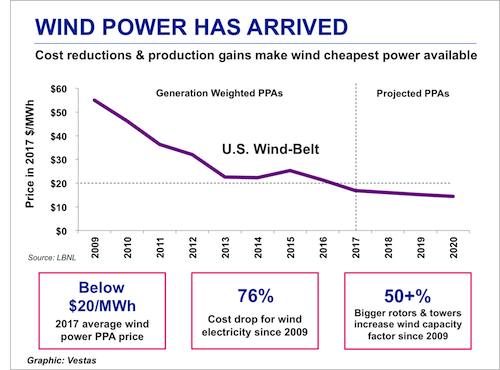 Wind’s market-beating price and proven reliability are key factors making it a preferred choice for U.S. energy customers. In 14 states, soon to be 25, across the U.S. wind belt (see chart and map), wind power costs have dropped below $20/MWh, past a critical tipping point where it is now cheaper to install wind than maintain existing coal power plants: 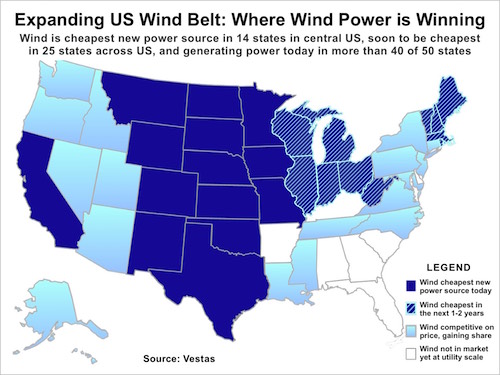 Even after ramp-down of the Wind Energy Production Tax Credit, cost trends promise to keep wind a preferred U.S. power choice on price. By 2030, unsubsidized wind costs are estimated to drop another 50 percent, below that of existing natural gas plants.

No surprise, energy customers are integrating wind power seamlessly and reliably across the U.S. grid — at record levels: 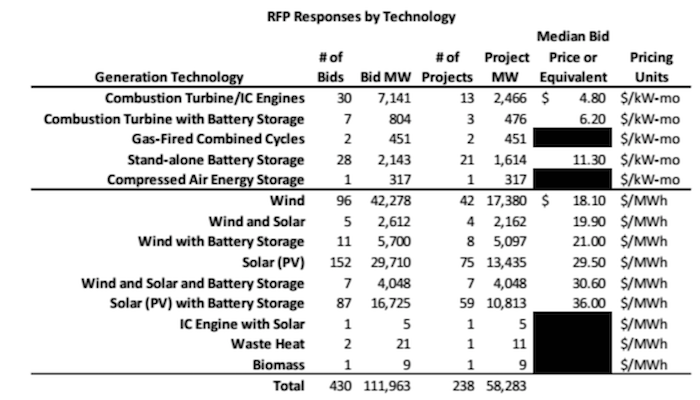 The actions of utility leaders at AEP, DTE, MidAmerican Energy and Xcel speak volumes. They’re adding wind generation by the GW, underscoring how well wind is integrating in the nation’s “all of the above” energy mix, especially with complementary clean power sources such as solar and natural gas.

Other utilities have taken note. In a recent survey, 76 percent of respondents said they expect significant or moderate growth of wind power in their generation mixes over the next 10 years. Wind, solar and natural gas rank as the top three energy sources among utilities for projected growth.

Looking ahead, prospects for wind and other clean power sources are strong and sustained, through 2020 and beyond. For the first time in a decade, more utility leaders are expecting a shift from flat demand to a growing U.S. market for electricity in the years to come, fueled in part by increasing use of electric vehicles (EVs).

This means that investing in more wind — already a smart move by customers to lower costs and improve performance of their existing generation fleets — becomes an even better strategy to meet growing U.S. demand for more electricity. 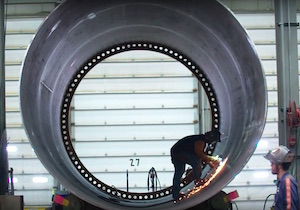 More wind can also help address concerns about cybersecurity, cited recently as a top issue by utilities. More decentralized wind and other renewable energies by their nature are less vulnerable than big power plants to grid-disrupting shutdowns. America’s increasing reliance on homegrown wind has been a key contributor to greater energy diversity and flexibility that is strengthening power grid resilience against extreme events and driving “year over year” improvements in grid reliability reported by the North American Electric Reliability Corporation (NERC).

Wind and other renewables are ready to meet the challenge of supplying more low-cost clean power to keep the lights on at home and electric vehicles whirring down the road. A new study by scientists in California confirms what the markets have shown is possible — wind and solar together can supply 80 percent or more of total U.S. power, combined with greater investment in transmission lines (the cheaper option) or more batteries and hydro storage (more expensive but doable). The leading sources of new power in today’s marketplace — wind, natural gas and solar — have proven they have all the necessary capabilities — low-cost, flexibility and reliability — and can work together to get us there.

Perhaps that’s why the Omnibus Spending bill Congress passed last month rejected calls by some to turn back the clock to energy technologies of the past. The final bill actually increased support for research on renewable technologies that are helping to transform America’s clean power economy, create hundred of thousands of U.S. jobs, and raise the nation’s competitiveness as a clean technology leader.

Market leaders and policy makers know a winner when they see one. The forecast for wind and America’s clean energy future looks bright.