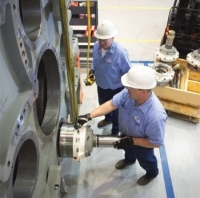 New Hampshire, United States [RenewableEnergyWorld.com] Wind manufacturing is recovering but growth is slow. That’s the message coming from the American Wind Energy Association (AWEA), which this week released its wind market report for 2010. The manufacturing sector for the wind industry has grown significantly in the past several years, adding, announcing or expanding over 100 facilities since 2007.

Currently, over 200 facilities across the U.S. serve as suppliers to the wind industry, and this figure does not capture the many additional facilities at the sub-supplier level. Wind manufacturing facilities can be found in every region of the United States.

Despite the slowdown in wind turbine manufacturing in 2009 compared to 2008, 10 new manufacturing facilities came online in the U.S. last year, 20 were announced and nine facilities were expanded, according to AWEA. The largest category was wind turbine sub-components, such as bearings, electrical components and hydraulic systems.

“It’s critical for our sector to have a [U.S.] manufacturing base,” said Liz Salerno, AWEA’s director of industry data and analysis. “The Midwest and Upper Midwest, where we have manufacturing capability is now starting to be utilized for turbine components and sub components.”

Currently, all 50 states have jobs in the wind industry and close to 85,000 people are employed in the wind industry today.  Wind energy jobs exists in a myriad of sectors including: turbine component manufacturing, construction and installation of wind turbines, wind turbine operations and maintenance, legal and marketing services, transportation and logistical services, and more. Compared to 2008, the construction sector employed an additional 500 workers in 2009 due to increased installation of new wind turbines.

Operations and management jobs also grew by 1,000 over the previous year. However, due to many turbines on the market in 2008 and the credit crisis, 1,500 manufacturing jobs were lost in 2009. While Texas currently leads in wind jobs, Iowa, Illinois, Pennsylvania, North Dakota and others are competing for new facilities and new jobs right now.

AWEA’s board of directors president and Iberdrola Sr. VP for development, transmission and policy Don Furman said that the U.S. is making progress but moving ahead will be difficult unless there are strong policy signals.

“We’re making strides and bringing manufacturing onshore, but we’re in a race between the policies of our country and policies of other countries. We’re the major wind market that doesn’t have an RES or an equivalent,” Furman said. Unless we have one we won’t get the jobs, they’ll go overseas for the next 20 years. That’s the race we’re in.”

Neverthelss good-paying U.S. jobs are being created and the industry will require professionals to keep up with the growing market.  To date, 205 educational programs now offer a certificate, degree, or coursework related to wind energy. Of these 205 programs, the largest segments are university and college programs (45%) and community colleges or technical school programs (43%). The programs offered specific to wind include wind turbine technician training, electrical engineering, mechanical & aeronautical engineering, science & technology, project management, policy, and many other programs.

“The graduates of Iowa Lakes Community College Wind Energy & Turbine Technology two year associate degree program all have jobs lined up before they graduate. The typical annual salary is in the $55,000 to $65,000 range, ” said Joe Jongewaard, project manager for the Iowa Department of Economic Development. “There are two to three of these operations and maintenance jobs created for each 100 MW of installed wind power. So in Iowa there are now about 700 to 1,000 of these jobs.”

The U.S. wind energy industry installed over 10,000 MW of new wind power generating capacity in 2009, the largest year in U.S. history, and enough to power the equivalent of 2.4 million homes or generate as much electricity as three large nuclear power plants.

There are 36 states that have utility-scale wind projects and 14 states are in the “Gigawatt Club” with more than 1,000 MW of installed wind capacity per state. In state rankings, Iowa leads in terms of percentage of electricity from wind power, getting 14% of its power from the wind, and also leads in highest number of jobs in the manufacturing sector. Texas leads in total wind capacity and in largest wind farms installed.

Steve Sawyer, executive director of the Global Wind Energy Council put the U.S. industry in context with the rest of the world. Currently, Sawyer said that 500,000 jobs exist in the wind industry worldwide, which means the U.S. currently has 17% of wind jobs in the world. The U.S. has also played a large role in doubling the world’s installed wind capacity roughly every 30 months.

Installed capacity worldwide is set to hit 200 GW by year end and 400 GW by the end of 2014. Sawyer warned that the rest of the world is gaining ground. He said that the U.S. and Canada remain the only OECD nations without clear strategy for electricity through to 2020, especially when it comes to renewables. Sawyer said that China, Japan, Korea, Australia and the European Union all have some kind of renewable energy targets, giving them an advantage in the fight for global wind jobs.

In order to continue the growth in generating capacity, AWEA once again called on the federal government to move ahead with plans for a federal renewable electricity standard, ideally 25% by 2025. AWEA CEO Denise Bode said that recent polling shows the American public is behind their push as 89% of Americans think wind is a good idea and 85% of american support having a federal RES.

“Jobs, business opportunities, clean air, energy security — wind power is delivering today on all those fronts for Americans,” Bode said. “Our annual report documents an industry hard at work and on the verge of explosive growth if the right policies — including a national Renewable Electricity Standard (RES) — are put in place. A national RES will provide the long-term certainty that businesses need to invest tens of billions of dollars in new installations and manufacturing facilities which would create hundreds of thousands of American jobs.”