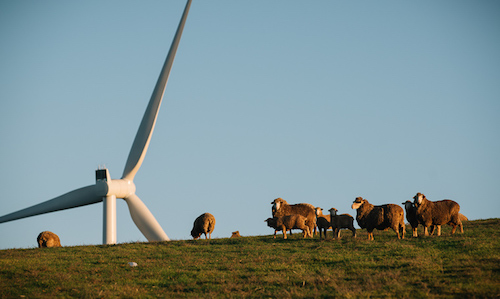 Seven of the 32 turbines in Phase 1 of the farm in the Mid North of South Australia were switched on to the grid following an “energization ceremony” on site on July 7.

The remainder of the Phase 1 turbines are expected to come on line in the coming months.

It was also announced that the Hornsdale project would feature local indigenous Australian art to acknowledge the Nadjuri and Nukunu people on one of the wind towers in a world-first. The artwork by Chris Angrave and Louise Brown is still being finalized.

Hornsdale was awarded a contract to deliver 100 MW to the Australian Capital Territory (ACT) in February 2015 as part of the first reverse auction, enabling Phase 1 to go ahead.

Under the reverse auction, companies were invited to put forward bids to the ACT Government detailing how they could generate the greatest amount of renewable energy at the least price.

In December it secured a second 20-year contract with the ACT Government, which will allow Phase 2 of the project — a further 100 MW — to go ahead possibly next year.

The $77 per MWh Hornsdale claimed it could achieve as part of its application to the ACT Government is believed to be the lowest price in Australia for wind energy production.

The farm has a potential output of 270 MW with the remaining capacity expected to come in a yet to be confirmed Phase 3.

Xavier Barbaro, Neoen’s global CEO, who was in Australia for the ceremony, said he was proud to see his company’s ability to deliver on ambitious clean energy targets.

“Hornsdale is a great example of the global strength of France and Germany working together to provide clean energy for 70,000 Australian homes and new employment, training and investment opportunities in South Australia and the ACT,” Barbaro said. “With almost 40 percent of the country’s clean energy produced by wind farms, Australia’s renewable energy footprint is increasing in size and global relevance — making it a great place to invest and do business.”

He added that “Neoen has been able to use our extensive wind and solar assets to expand rapidly in Australia since we started operations here in 2012. We look forward to continued success in Hornsdale and across the country.”

According to Neoen, the wind farm features the latest in blade technology that harvests more wind energy — increasing the annual energy yield of the turbines. Each rotor of the 32 turbines sweeps a total of 10,000m2 — an area equal to 320 school buses parked together. Hornsdale uses the latest data and digitalization platforms; every rotation is remotely monitored to increase effectiveness and efficiency.

The wind farm spans 13 properties and stretches along a range of hills for about 20km near Jamestown, which is 220km north of the South Australian capital Adelaide.

South Australia’s Mid North is already home to some of the nation’s biggest wind farms including Snowtown and Hallett.

The region’s proximity to major power lines, abundance of wind and relatively sparse population makes it an attractive location for wind power generation.

Siemens Australia is the turnkey builder of the Hornsdale wind farm. Each of the 32 turbines in Phase 1 will be 92.5 metres high with 55m long rotor blades.

“Siemens has over 30 years’ experience in wind power managing over 16,800 turbines globally,” Pryke said. “It’s important to continually develop technology to support a more sustainable and environmentally friendly future for communities and the Hornsdale wind farm is a strong testament to this focus for Siemens.”

He added that “this project is the epitome of partnership combined with the best technology to bring ingenuity to life for the benefit of society. It’s good for the environment, good for the economy and good for the community — all critical ingredients for sustainable success.”

South Australia leads the nation in the uptake of wind energy and rooftop solar, with renewable sources accounting for more than 30 percent of the electricity generated in the state. The State Government aims to extend this to 50 percent by 2025.

This article was originally published by The Lead Australia under a Creative Commons license. It was edited for style and some links were added and removed.