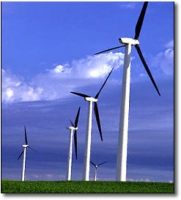 With some of the worst air quality in the county, and vastly increasing demands for electricity, the city of Los Angeles is a perfect candidate for a large-scale boost of clean, renewable energy. A new city proposal for construction of a 120 MW wind farm would be the largest municipally-owned wind project, and could be just the ticket to alleviate the city’s growing energy and air quality concerns.

Los Angeles, California – May 3, 2004 [SolarAccess.com] The Los Angeles Department of Water and Power (LADWP) has mailed out notices that it will begin preparing a draft Environmental Impact Report (EIR) to move forward with a proposed wind generating facility. The Pine Tree Wind project would provide up to 120 megawatts (MW) of renewable energy — enough to power approximately 56,000 homes per year. Located approximately 12 miles north of Mojave, Calif., 6 miles west of Highway 14, the project consists of 80, 1.5 MW wind turbine generators, as well as a 10-mile transmission line and electrical substation. LADWP’s goal in developing the project is to reduce air pollutant emissions and dependence on fossil fuels, while at the same time, helping to meet anticipated growth in energy demand for Los Angeles, expected to average about 80 MW per year over the next 16 years. “The Pine Tree Wind project is an important piece of the city’s efforts to increase its share of electrical generation capacity with clean and renewable energy sources,” said Frank Salas, acting general manager. At the request of the Los Angeles City Council, LADWP is currently developing a renewable portfolio standard (RPS), with the goal of increasing its share of renewable generation to be consistent with the standard set by the state legislature for privately owned electric utilities. Letters announcing the “Notice Of Preparation” (NOP) of a draft EIR were sent to all relevant federal, state, county, local public agencies and other interested parties. The NOP signifies that the LADWP, as the lead agency under the California Environmental Quality Act (CEQA), will now begin preparing an EIR. Announced in February 2003, LADWP has spent the past year designing a wind project that would minimize potential impacts to sensitive environmental resources and that would be compatible with military training activities. According to the current design, the project will be built on approximately 8,000 acres (about 12.5 square miles), reduced from the original 22,000-acre site, on privately owned property that would be leased under a long-term agreement. Henry Martinez, LADWP chief operating officer – power, said that LADWP is working closely with representatives from nearby military operations, including Edwards Air Force Base and the Naval Weapons Station China Lake, to coordinate the project. “Through discussions with military representatives and looking ahead at other potential environmental impacts, we have made a good start in addressing many of the environmental issues,” Martinez said. “We look forward to advancing this project to ultimately provide clean, renewable energy for the Los Angeles area.”