More
Home Solar Letter from the Editor: Innovation in Renewables 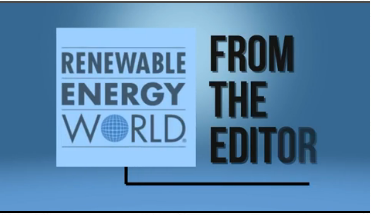 I’ve been thinking a lot about innovation this month. I wrote about how wind construction companies are innovating to lower costs in our cover story and talked about that in my video above.

But I’m also thinking about BIG innovation — the world-changing kind. In April, I attended the Powering Progress Together (PPT) forum, hosted by Shell and the Rocky Mountain Institute (RMI). Visionaries from both organizations presented their views of the future of energy.

Each visionary began his presentation with photos taken in the early 1900s. In only 13 years, the Easter Parade in New York City went from one filled with horses and buggies to one in which there were no horses of any kind. That means that those buggy manufacturers had only a short time to abandon their business as usual scenarios, retool and become automakers. If they waited too long, they were beat but if they jumped in too early, the market may not have been ready for them.

As Lovins stated, the pioneers have the arrows in their backs, the settlers get the land. It may be time for major fossil fuel companies to start ensuring their companies are ready for a future with wind and solar as a primary energy source and EVs dominating the transportation sector. If they are not already doing that, it may be too late.