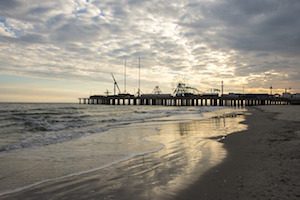 New Jersey legislators yesterday approved a bill that would allow the New Jersey Board of Public Utilities (BPU) to consider an amended application for the 24-MW Fishermen’s Energy offshore wind project.

EDF Renewable Energy last week said that it entered into a preliminary agreement with Fishermen’s Energy to acquire the fully developed 24-MW project sited in New Jersey territorial waters off the coast of Atlantic City. The BPU rejected a previous application for the project, and Fishermen’s Energy suspended operations for the project in 2016. The bill directs the BPU to accept an amended application and consider any relevant information filed in connection with the prior project application in undertaking its review, according to a statement from the Assembly Appropriations Committee.

“The Fishermen’s Energy Offshore Wind Project off the coast of Atlantic City is a ready-to-go project that can create jobs and diversify our energy portfolio,” Assemblymember Vince Mazzeo said in a statement. “Former Governor Christie’s complete backtrack on wind energy during this tenure in office set New Jersey back a decade in utilizing offshore wind. It’s time to get moving again to truly harness the incredible potential we have in New Jersey for offshore wind.”

The BPU will have 90 days to act on the application upon its submission. EDF RE said last week that it expects to put the project into commercial operation in 2020.

Gov. Phil Murphy in January signed an executive order directing the BPU to fully implement the 2010 Offshore Wind Economic Development Act (OWEDA) and begin the process of moving the state toward a goal of 3.5 GW of offshore wind energy generation by 2030.

“New Jersey has enormous potential of offshore wind,” Assemblymember Wayne DeAngelo said. “However, even with [OWEDA], the State has not yet begun to develop any offshore wind projects. These projects cannot be delayed any longer.”

The bill now goes to the governor’s desk for consideration.