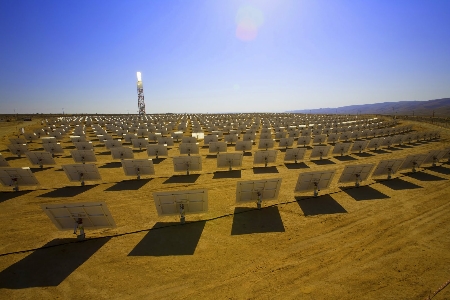 On the day when Gov. Jerry Brown is expected to sign legislation giving California the country’s steepest renewable energy target – 33%  by 2020 – Google has bragged about its own $168 million investment in big solar.

The Google money is going to Brightsource’s Ivanpah project, rated at 392 MW. If it keeps running for 25 years, as expected, it would be the equivalent of taking 90,000 cars off the road, Google brags.

You can argue about whether the investment is wise, and even if the technology is new. It’s simply a whole bunch of mirrors, called heliostats, pointed at a tower in the center. The tower contains a salt, heat from the heliostats melts it, so the plant can produce energy both in daylight and at night, as the salt cools.

Unlike some of Google’s other investments in the space, this is proven technology. Brightsource already has a plant of this type (right) in Israel’s Negev Desert. Bechtel, the giant contracting company, has been signed to do the construction. The loans are guaranteed by the Department of Energy and the project will go online in 2013.

Had companies like Bechtel not seen a way to profit from projects like Ivanpah, in other words, I really doubt Gov. Brown could have gotten a 33% renewable standard through the legislature.

It’s not a question right now of big solar or small solar, big wind or small wind. It’s a question of energy harvesting or caveman energy, energy collected from the abundance all around us or materials ripped from the ground and burnt. Until that choice is made, arguing over the environmental impact of any renewable project strikes me as energy misspent.

What few people understand is that, once the cost of energy harvesting crosses under that of gasoline, nuclear, coal and even natural gas, it’s not going to stop going down. Once a solar system is installed and paid for, what comes out is basically free. Once declining prices become a problem, then we can argue about which projects, from which companies, are doing the most environmental damage and need to be shut down.