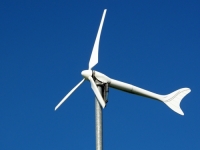 The installation of small wind turbines is growing rapidly in Italy since the introduction of feed-in tariffs, according to a report by the Department of Engineering at Milan’s Polytechnical University (Politecnico di Milano Dipartimento di Ingegneria Gestionale).

Since the introduction of feed-in tariffs for small wind turbines in 2008, installations have grown exponentially says the University’s Wind Energy Report.

More than 90% of the turbines are less 80 kW in size. The majority of the capacity, 70%, is installed in the southern provinces, 25% in the central region, and only 5% in the mountainous north.

In 2011, Italy installed more than twice as much small wind generating capacity as the US relative to its population. The same will likely be the case in 2012.

Feed-in tariffs have proven effective for rapidly developing new small wind generating capacity. In North America, only Nova Scotia and Vermont have effective feed-in tariffs for small wind. Most of the US uses a mix of state and federal subsidies in combination with net-metering.

Italian feed-in tariffs for small wind are quite lucrative, effectively double that of total payments for commercial wind under Italy’s Green Certificate (Certificati Verdi) system. Yet, Italian small wind tariffs are comparable to those in Britain and other countries.

New tariffs go into effect at the end of the year. Italy will differentiate small wind into two size tranches: <20 kW, and 20 kW to 200 kW. While the tariffs have been cut modestly, the contract term has been extended from 15 years to 20 years.

Small wind in Italy is now nearly 50% more expensive than the most expensive solar PV per kilowatt-hour of generation.

According to the University’s Wind Energy Report, 3% of the Italy’s land area has average wind speeds of greater than 6 m/s or good to excellent wind, 37% has average wind speeds from 4 m/s to 6 m/s or sites with good wind. The report quotes the Italian wind energy association (Associazone Natzionale Energia dal Vento), that Italy has the potential for 1,000 MW of small wind capable of generating 1.5-2 TWh per year. For comparison, solar PV generated more than 10 TWh in 2011.