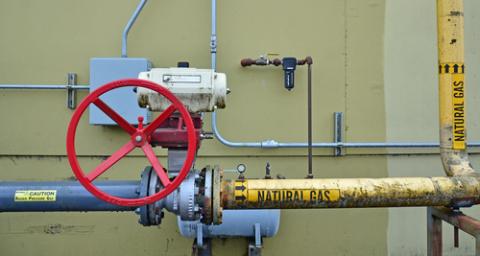 NEW YORK — U.S. President Barack Obama says natural gas can be a bridge from coal to a cleaner energy future. Investors are showing it’s more likely a bridge to nowhere.

Fracking — the process of blasting water, sand and chemicals into miles-deep shale rock to extract fuels — has helped push U.S. natural gas production to new highs in each of the past seven years, according to the Energy Information Administration. It’s also more expensive than traditional drilling and contributes to global warming, according to the U.S. Environmental Protection Agency. Renewables, which are getting cheaper, have lost support even as the United Nations warns that time is running out to stem climate change and China forges ahead with sustainable power.

“Everyone in Washington thinks gas is a savior, so Washington has been oblivious to the renewables revolution, but China hasn’t been oblivious,” said Hal Harvey, the chief executive officer of San Francisco-based Energy Innovation: Policy and Technology LLC who has been appointed to energy panels by presidents George H.W. Bush and Bill Clinton.

The shale revolution has brought the country closer to energy self-sufficiency than at any time in the last three decades, according to the EIA. It’s also changed the way Americans invest, said James McDermott, managing director of the U.S. Renewables Group. He said his Los Angeles-based investment firm, which manages more than $750 million, is currently raising money only overseas.

Hydraulic fracturing, the technical name for fracking, has helped open the money tap for gas and oil. Since 2012, investors added more than $2.3 billion to the Energy Select Sector SPDR Fund, which tracks oil and gas companies. In the same period, investors withdrew $32.5 million from the Powershares Wilderhill Clean Energy Portfolio, the biggest exchange-traded fund tied to renewable-energy equities, according to data compiled by Bloomberg.

“There’s absolutely no question that investors’ dollars have moved from one to the other,” said Bruce Jenkyn-Jones, a managing director at London-based Impax Asset Management Group Plc, which oversees about $4.2 billion.

Even as investors have embraced fracking, more Americans tell pollsters they oppose the practice than support it, according to a September survey by the Washington-based Pew Research Center. It’s true that windmills as tall as 40-story buildings are still sprouting in the Great Plains, and more solarpanels are appearing on Americans’ roofs, including at the White House. The U.S. is generating more power from these sources than ever before.

Yet the pace is slowing. Combined capacity for solar and wind power expanded 9 percent to 76,326 megawatts in 2013, down from a 30 percent increase in 2012, according to data compiled by Bloomberg.

And the use of fossil fuels still dwarfs that of renewables. Half of new power-plant capacity in the U.S. last year was natural gas — 6,861 megawatts, according to the Energy Department. That’s enough to provide electricity to the state of Massachusetts. It’s also 25 percent more than the combined capacity additions for solar, wind, biomass and water power.

In China, it’s a different story. Though the country burns more coal than any other, darkening the sky over its biggest cities, wind capacity expanded 21 percent to 91,412.9 megawatts in 2013, on top of 21 percent growth the year before, according to the Global Wind Energy Council. The country’s solarcapacity more than doubled in each of the past five years, according to Bloomberg New Energy Finance. Its capacity overtook the U.S. in 2013 and is now second in the world only to Germany, data show.

China is also turning to shale gas to lessen its dependency on coal. The country holds the world’s largest potential reserves yet its technology is a decade behind the U.S., BNEF said in a report today. So China is spending as much as four times more than the U.S. to develop shale gas fields, according to the report.

U.S. clean-energy companies did raise an unprecedented $2.9 billion in equity last year. Yet fossil-fuels companies sold shares valued at more than 14 times as much, also a record, data compiled by Bloomberg show.

The country’s oil and gas output are rebounding after decades of decline. Hydraulic fracturing and horizontal drilling helped the U.S. overtake Russia and Saudi Arabia to become the world’s biggest combined producer of oil and gas last year, according to the Energy Department.

“Today, America is closer to energy independence than we’ve been in decades,” Obama said in his State of the Union address in January. “One of the reasons why is natural gas — if extracted safely, it’s the bridge fuel that can power our economy with less of the carbon pollution that causes climate change.”

Shale has its enthusiastic supporters in the oil patch, on Wall Street and in Washington.

The shale revolution is part of the never-ending American revolution, according to James Volker, the chairman and chief executive officer of Denver-based Whiting Petroleum Corp. That revolution is “here to stay,” Ed Morse, Citigroup Inc.’s head of commodities research, wrote in the May issue of Foreign Affairs. And Senator Mary Landrieu, a Democrat from Louisiana, home of the Tuscaloosa Marine Shale formation, said at a March hearing that new discoveries in oil and gas, such as the one in the state where she faces a re-election battle this fall, rescued the country from an even deeper economic downturn and “fortified our national economy.”

Renewables had their own, less widely celebrated breakthrough. The cost of photovoltaic solar energydropped 56 percent in the past four years, according to calculations by Bloomberg New Energy Finance.

“Renewables got incredibly competitive,” said Ted Brandt, chief executive officer of Marathon Capital LLC, a Chicago-based energy and infrastructure investment bank. “What the oil and gas business has done is pretty spectacular. It’s not a well- told story but the renewables business is pretty amazing as well.”

And even as the gap narrows, wind and solar are still more expensive than natural gas. A megawatt-hour of solar power cost $139.25 last quarter, compared with $84.81 for wind energy and $84.21 for gas, according to Bloomberg New Energy Finance.

Cheap gas blunted the appeal of renewable energy, yet shale resources haven’t stayed as inexpensive as they were. Natural gas fell to a 10-year low in 2012 because drillers looking for oil came up with gas, too, and created a glut. Since then, gas futures have risen 140 percent to $4.588 per million British thermal units; traders anticipate even higher prices next winter. In January, frigid weather and a temporary shortage caused spot prices in New York to spike as high as $99.66 per million British thermal units, data compiled by Bloomberg show.

Fracking is more expensive than traditional extraction methods. Shale gas costs between $3 and $10 per million British thermal units to get out of the ground, compared with as little as 20 cents to extract some conventional supplies outside the U.S., according to the International Energy Agency. One shale well, which bores horizontally through rock, can cost as much as $13 million, compared with as little as $1.5 million for traditional vertical drilling, according to data from Goodrich Petroleum Corp. and Hart Energy LLC.

Shale production also declines faster than conventional supplies. When new drilling stops, gas output drops by about 50 percent in about three years, according to the IEA. That means production only grows by constantly drilling new wells.

There have been “several cases” of water contamination from faulty wells or improper disposal, the National Ground Water Association said in April. And leaks of methane, which traps 21 times more heat in the atmosphere than carbon dioxide, while extracting and transporting gas are as much as 75 percent higher than the U.S. Environmental Protection Agency estimates, according to a February study in the journal Science.

“There’s a not very appealing scenario where we in the next decade feel very content with what is happening with shale gas in North America, while other countries, particularly the Chinese, are building up leading technology in renewables,” said Wal van Lierop, CEO of Chrysalix Energy Venture Capital in Vancouver. “And suddenly, in the early 2020s, we in North America may realize that they own the technologies of the future.”