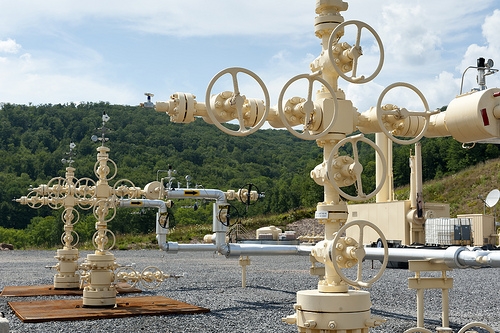 Dubai — A boom in shale-gas extraction, the technique that made the U.S. the top producer of the fuel, would complement growth in renewables because both curb use of dirtier commodities, the International Renewable Energy Agency said.

“Gas in the first instance is going to displace coal,” Adnan Amin, director-general of the agency known as IRENA, said in an interview in Abu Dhabi. “Shale gas at low cost can help to create a hybrid system,” whereby more gas-fired power is fed to the grid, supplanting coal, and augmented by wind and solar.

Countries are seeking to diversify their energy mix, cut imports and contain output costs without adding to emissions. While a decline in the cost of renewables has made many more competitive with fossil fuels, gas prices have also sunk as U.S. output expands, falling to $1.91 a million British thermal units last April. Gas releases carbon yet burns more cleanly than coal and can supply constant power unlike intermittent wind or solar.

“There’s increasing sensitivity to carbon emissions,” Amin said yesterday. “Gas is much cleaner so it will be the fuel of choice at these prices for power generation.” Solar or wind energy can complement gas-fired generation by running when available, he said.

IRENA will publish a report next week on the cost of renewables compared with fossil fuels. Costs for some types of solar panels have fallen by as much as 60 percent in two years, Amin said. Small-scale hydropower is often the cheapest form of energy available to many developing countries, according to a draft version of the report seen by Bloomberg News.

The agency will also present a Web-based map of where solar and wind power can be most effective globally, taking account of the sun’s strength and the availability of wind, and will be expanded to cover other renewables, Amin said. The data will be released at the start of IRENA’s annual assembly in Abu Dhabi, where it’s based and where the World Future Energy Summit also takes place.

Middle Eastern countries such as the United Arab Emirates and Saudi Arabia are developing renewable energy to cut emissions and reduce domestic consumption of oil that could otherwise be exported. Abu Dhabi, the U.A.E. capital and holder of about 6 percent of global crude reserves, won the right to host IRENA in June 2009 after it embarked on a $22 billion project to develop the carbon-free city Masdar and set a goal to generate 7 percent of its power from renewable sources by 2020.

Saudi Arabia, the largest oil exporter, plans to attract $109 billion in solar investments to generate a third of its electricity by 2032, or about 41,000 megawatts. It currently has about 3 megawatts of solar installations, trailing Egypt, Morocco, Tunisia, Algeria and the U.A.E., according to researcher Bloomberg New Energy Finance.

The country, which uses crude or fuel oil to produce power, is losing “about $90 a barrel in opportunity cost for every barrel they use at home,” Amin said. “With the declining cost of renewable, and solar in particular, it makes absolute sense for them to do large-scale on-grid solar in Saudi Arabia to replace oil.”