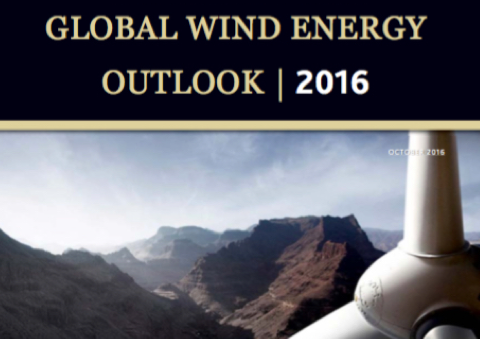 The report highlights that the global wind industry underwent a record year through 2015, closing with annual installations of 63 GW and total installed capacity of some 433 GW.

On a national level, China leads the wind industry, with cumulative wind power installations (145 GW) at the end of 2015 greater than all European Union countries combined (141.6 GW). (See, ‘Another Strong Year for China’s Wind Industry’.)

The report provides forecasts for future wind capacity in 2050 varying from a conservative 2,870 GW under the International Energy Agency’s (IEA) New Policies Scenario, to its most ambitious 5,806 GW under the GWEC Advanced Scenario.

Under the GWEC Advanced Scenario, wind power is projected to provide at least 36 percent global electricity demand in 2050.

The GWEC Advanced Scenario is based around ambitious growth rates being maintained through until the end of the decade, and assumes that a “broad, clear commitment to the decarbonization of the electricity sector emerges quickly with the ratification of the 2015 Paris Climate Agreement”. 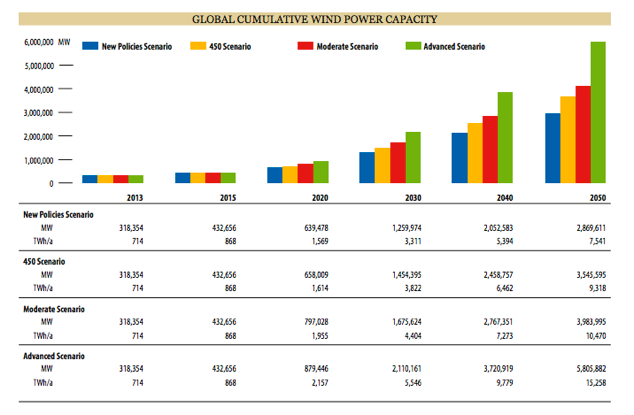 The report provides projected costs per kilowatt achieved under each of its scenarios too – fuller details on forecasted costs, and drivers for decline in costs, is presented below. 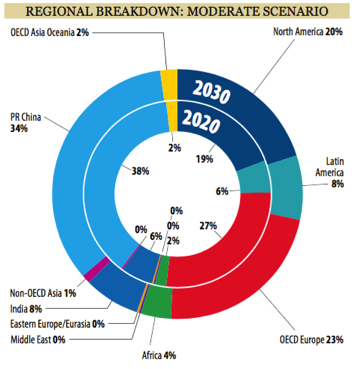 Going forward, wind power capacity is expected to continue its expansion in the established markets of Asia, Europe, and the US. However, new and emerging markets are expected to become significant hotspots for investment.

“The EU, US, China and India over the past decade have been the traditionally stable markets for wind. They will continue to be strong. However, we believe Latin America is going to be a region to look out for over the coming decade. Brazil reached 10GW this year. Chile crossed the 1GW mark. Uruguay is looking to match Denmark’s renewable energy penetration levels. Argentina recently held its first renewables auction successfully.

“Currently the region has over 12GW of wind installed. We think that by 2020 the region could triple cumulatively see over 38GW installed and this could once again more than triple to over 124GW by 2030.” (These projections are based around the GWEC Advanced Scenarios.)

Africa is also slated to experience considerable growth going forward under all scenarios considered. The Moderate Scenario, for instance, envisions expansion on the continent of Africa from a little over 3 GW at the end of 2015, to over 16 GW by 2020, and over 60 GW by 2030.

Aside from new capacity of emerging markets, a novel aspect to future growth is pitched to come from repowering projects. Repowering here refers to the refurbishment of wind turbines as they reach the end of their planned lifetimes (typically of 20 years).

Necessarily therefore, this growth is expected to occur within mature markets. The GWEC report said that “the need for substantial and increased repowering has been built into the GWEC scenarios, becoming a significant factor after 2025.”

The development of wind turbines designed with efficient operation at low wind speeds is also noted as a driver for new wind capacity as these machines open up the wind market to regions with low wind resources.

GWEC observe that 2015 proved a very successful year for the global offshore wind industry. Over 3.4 GW in new capacity was installed over five markets globally, bringing total offshore wind capacity to over 12 GW.

The remainder is installed largely in China, followed by Japan, Taiwan and South Korea — all markets tipped for significant growth. A GWEC-led consortium, FOWIND, is engaged in developing an offshore wind road map for India too.

This being the case, offshore wind is pitched to make a substantial impact as an emerging technology in countries now setting ambitious targets for offshore wind and development.

GWEC highlight the particular significance of recent record low bids for offshore projects. By way of examples, the report cites the Dutch auction for the 700 MW Borssele project in July 2016, which came in at less than 73 euros/MWh (US$80/MWh) and Vattenfall’s win at the 350 MW Danish nearshore projects with a bid price of 60 euros/MWh ($US66/MWh).

Regarding these price developments, Shukla said that offshore wind is seeing some “fantastic numbers” across the latest projects.

“This is not a standalone phenomenon, rather it’s a result of the tremendous learning and technological innovation exhibited by both the OEMs and the offshore developers in the last decade,” Shukla said. “In the EU last year, almost every third new wind turbine that went up was offshore.” 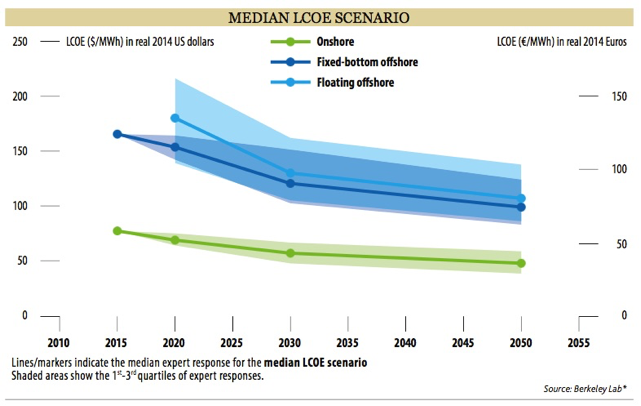 GWEC reported on outcomes of a study from the U.S. Department of Energy’s Lawrence Berkeley National Lab, NREL and others, which provides encouraging insights on the trends for falling levelized costs of energy of onshore and offshore wind power.

Importantly, floating offshore wind technologies — a nascent technology at the moment — are under demonstration at many sites around the world. This technology, however, is pitched to bring high wind resources found in deep waters into reach of developers.

GWEC described an overwhelmingly optimistic picture for the development of wind power going forward over the coming decades.

“Having experienced double-digit cumulative growth for nearly 20 years, wind is unique among modern manufacturing industries, to the point where the fastest growing job in the U.S. is that of a ‘wind energy technician’” the GWEC report said.

Nevertheless, a degree of uncertainty is unavoidable in forecasting.

In the chapter ‘The Future of Wind,’ the report said that there are two overarching questions that have critical bearing on the rate and scope of wind power’s expansion over the coming decades.

“Firstly, will humanity once and for all join forces to combat the existential threat of climate change? The Paris Agreement gives hope that this might be the case.

Secondly, is there some miraculous technological breakthrough just around the corner that will transform the power sector without the need for wind, solar and other existing technologies? It doesn’t seem likely, but it can never be ruled out.

Answering those two questions is far beyond the scope of this report, or of the wind (or any other) industry. But this report is the best look at the future of wind energy based on what we know and what we can reasonably expect to happen.

The cost issue is all but gone. It is merely now a question of summoning the political will to put together the programs and policies which will enable the smoothest transition to a global energy system based on renewable energy.”

That renewable energy system, GWEC claimed, is one that will be “led by wind.”

The report concluded: “This is necessary in order to meet challenge of climate change, to preserve our precious fresh water resources, make our cities liveable again, and create new industries, new jobs and greater energy security for our citizens and our economies.”