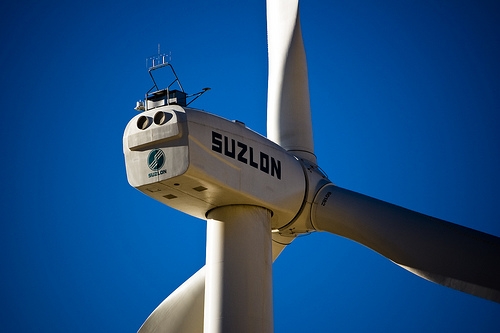 Suzlon Energy Ltd., India’s largest wind-turbine maker, may cut jobs and sell bonds this year after reporting its second-biggest quarterly loss since at least 2007 as costs rose. The company’s shares fell to a record low.

Suzlon, which has lost money for three consecutive years, faces repaying debt and boosting orders as industry competition grows. Demand for turbines is forecast to lag in China and the U.S., the world’s largest wind markets, and a global supply glut has driven down the price of machines by 23 percent since 2009, according to data compiled by Bloomberg.

The Pune-based company plans a foreign currency-denominated, high-yield bond issue of as much as $500 million in the third quarter, Vagadia said. The company must redeem $142.2 million of convertible notes maturing on Oct. 11, according to data compiled by Bloomberg.

“We’re bringing more efficiency to the organization,” Vagadia said from Mumbai, declining to identify how many jobs may be cut or from which division. A lack of working capital constrained Suzlon’s ability to carry out orders in the first quarter ended June 30, Suzlon said yesterday after reporting a quarterly loss of 8.5 billion rupees ($153 million).

The chief financial officers at the Suzlon group and the company’s German Repower Systems SE unit quit earlier this year, leaving Vagadia and another internal hire to fill the positions.

To meet debt obligations, Suzlon has borrowed $300 million from banks and liquidated non-critical assets, including two Indian wind farms in April and a Chinese factory. The company redeemed $360 million of convertible notes on July 27, the last day of a 45-day extension it had requested of bondholders while it raised money from lenders.

Suzlon has “already identified” sources of funds to meet its October bond obligations and expects to raise working capital this quarter, Vagadia said.