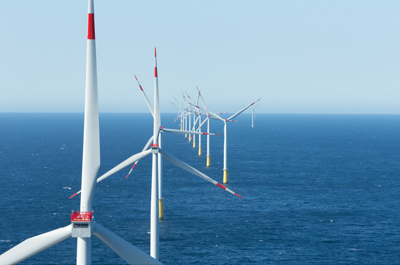 Prime Minister Narendra Modi’s government adopted a policy for India’s offshore wind industry, paving the way for developments as much as 200 nautical miles into the surrounding seas.

The Ministry of New and Renewable Energy and the National Institute of Wind Energy were authorized to start allocating blocks offshore for wind developments, according to a government statement on Wednesday.

The decision is part of Modi’s effort to tap cleaner forms of energy, balancing the need to extend power to rural communities against pressure from the United Nations to curb pollution as part of a global deal on climate change. The rules put in place a framework of regulation developers need to start planning projects, though the high cost of installing turbines in the water may limit the spread of the technology for now.

“Offshore wind is also significantly more expensive” than other renewables, Anish De, a partner for infrastructure and government services at the consulting company KPMG, said. “It will be important to see how the issues are addressed and if the scale plays out beyond the initial promotion-driven projects.”

The program will allow developments in India’s exclusive economic zone. It will also allow research work in Indian waters.

“The development would help the country in moving forward towards attaining energy security and achievement of the National Action Plan on Climate Change targets,” the government said in its statement.

India currently has 23 GW of onshore wind capacity, which the government plans to expand to 60 GW, part of a target to get 175 GW of clean energy by 2022.