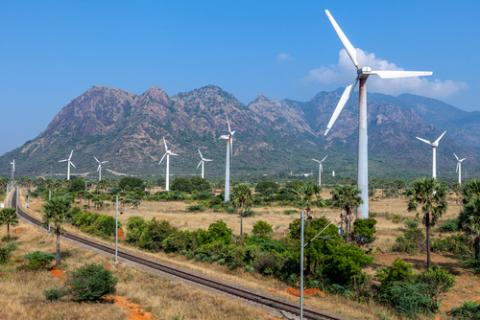 MUMBAI — India plans to revive tax breaks for wind farms after the expiry of earlier incentive programs led to a 47 percent slump in installations, according to two government officials with direct knowledge of the matter.

The Ministry of New and Renewable Energy proposed to resume a break for depreciation on wind farms and boost a subsidy for alternative generation, the officials said, asking not to be identified because the proposal is awaiting Cabinet approval.

Investment in the wind industry sputtered after the two incentives expired on March 31, 2012, stalling turbine orders for manufacturers such as Suzlon Energy Ltd. (SUEL) and Gamesa Corp. (GAM) Tecnologica SA. The slump in installations last financial year toppled India from its place as the world’s third-biggest market for the industry, according to data compiled by Bloomberg.

Investors may claim the tax break and subsidy retroactively from April 1, 2012, should they be revived, the officials said.

Under the program, wind-farm owners could claim accelerated depreciation on 80 percent of the cost of equipment, allowing them to write off investments quickly. Alternatively, they would be allowed 500 rupees ($8.37) per megawatt-hour of electricity fed into the grid under the generation-based incentive program.

Accelerated depreciation drove a third to half of yearly installations, according to the ministry. Minister Farooq Abdullah blamed the incentive in 2011 for prompting investors to put up wind farms for tax breaks rather than generating power.

The ministry decided to revive it after comparing wind farm output based on data from the Central Electricity Authority and finding projects operated at similar efficiencies, or plant load factors of about 21 percent, regardless of the incentive they chose, according to the officials.

The proposal also supports raising the amount of the generation-based subsidy and its cap of 6.2 million rupees per megawatt, the officials said, declining to say by how much.