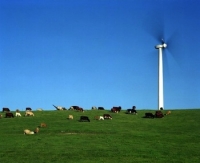 California, United States [RenewableEnergyWorld.com] The stimulus package passed in 2009 by Congress may help shovel-ready community wind projects move ahead, according to a new report by Mark Bolinger, a scientist in the Environmental Energy Technologies Division of the U.S. Department of Energy’s Lawrence Berkeley National Laboratory. Bolinger analyzed the impact of two new incentives for wind power that were included in the Recovery Act.

“The analysis shows that community wind, which has had more difficulty using the PTC than commercial wind, may benefit disproportionately from this newfound ability to choose among these federal incentives,” says Bolinger.

A financial model of community-scale wind power projects developed by Bolinger indicates that the ITC and cash grant will likely be worth more than the PTC to most community wind projects. Also, several “ancillary” benefits associated with the ITC or cash grant (but not the PTC) – including full relief from the alternative minimum tax and so-called “passive credit limitations” – could provide a further boost to these projects by enabling them to capture the full value of the incentive.

“Quantitative analysis of these ancillary benefits also informs the development of a policy agenda for community wind, by revealing which of these benefits are most valuable to the sector,” says Bolinger. “For example, the analysis highlights the importance of the 30% cash grant for passive investors in community wind projects. In this light, seeking to extend the very limited window of opportunity [afforded by the current legislation] for the 30% cash grant may be a logical top policy priority for the community wind sector.”

“Community wind” power development refers to wind projects that are locally owned (meaning that one or more members of the local community have a significant and direct financial stake in the project, other than through land lease or property tax revenue), consist of utility-scale turbines (generally 100 kW or larger), and are interconnected on either the customer or utility side of the electric meter (i.e., either displacing power purchased from the grid, or selling power directly to the grid, respectively).