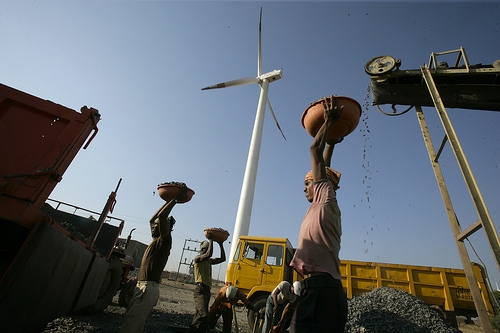 The cost of wind power has dropped below the price of coal-fired energy in parts of India for the first time as improved turbine technology and rising fossil-fuel prices boost its competitiveness, Greenko Group Plc said.

“Today we’re able to supply energy below the cost of conventional power,” said Mahesh Kolli, president of Greenko, which is building wind projects with General Electric Co. in India. “That’s the key development for this year.”

The cost of wind has closed in on coal thanks to more advanced turbines, which can produce more electricity from lower wind speeds. The shift means new wind farms in India will be able to survive without state subsidies, potentially attracting investors to a country where 57 percent of installed capacity is coal-based and 31 percent renewable, including hydropower.

Greenko began operating its first wind project in Ratnagiri in Maharashtra state this year using 1.6-megawatt GE turbines designed for low winds. That farm is “achieving efficiencies never before seen in India,” with a 30 percent plant load factor, Kolli said today by telephone. That’s a measure of a site’s actual generation compared with its theoretical capacity.

The company, based on the Isle of Man, has signed agreements for more than 1,000 megawatts of wind capacity and a three-year contract to buy at least 450 megawatts of GE turbines. State power distributors in places such as Karnataka, Rajasthan, Maharashtra and Andhra Pradesh have a “market incentive to buy wind power because we’re cheaper,” Kolli said.

The executive didn’t specify the cost of generation, which varies according to state. Estimates from Bloomberg New Energy Finance show the most efficient wind projects in India run at a similar cost to new coal-fed plants. The best projects have a levelized cost of energy, which allows for comparison between different fuel sources, of 2.7 rupees (5 cents) to 4.4 rupees a kilowatt-hour, compared with coal’s 1.9 to 4.8 rupees, Ashish Sethia, an analyst at London-based BNEF, said in a July 3 note.

The economics of Indian wind developments may lure investors away from markets such as the U.S., where the end of a tax break for wind-power utilities could cause a 75 percent slump in new installations next year, according to BTM Consult, a unit of Navigant Consulting Inc. Kolli said India’s decision to suspend a wind subsidy in April won’t affect investments.

The generation-based incentive, which paid wind farms a 500-rupee subsidy for every megawatt-hour of electricity fed into the grid, is only the “icing on the cake,” he said. Its loss won’t diminish the 19 percent return on wind projects that Greenko assumes in its 15-year power sale agreements, he said.

The current cost to build wind farms in India is about $1.25 million a megawatt, according to Kolli. While that price has largely held steady, the company is buying turbines that are 20 percent more efficient than in the past, he said.

Greenko already has more than 200 megawatts of operating hydropower capacity in the country. Hydro and wind projects in India benefit from an abundance of renewable sources of energy, unlike coal and gas-fired generation which has been hurt by fuel supply shortages.

Greenko reported a 6.5 percent increase in net income to 9.5 million euros ($11.6 million) for the financial year through March. Its shares fell 0.4 percent to 107 pence as of 12:28 p.m. in London today, extending their decline this year to 11 percent.