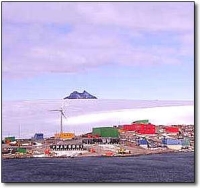 Mawson, Antarctica [RenewableEnergyAccess.com] The viciously-cold winds that howl down to the coast of Antarctica from the inland icecap are now harnessed by wind turbines that supply remote power to an Australian research facility, which is developing methods for on-site hydrogen production.

The Australian Antarctic Division (AAD) received a grant of half a million dollars from the Australian Greenhouse Office to demonstrate the use of hydrogen generated by wind in Antarctica. The demonstration project at the remote Mawson site will research the safety and operational aspects of using hydrogen on station, as well as its viability as a major energy carrier. Hydrogen is not, as many people believe, an energy source. Neither is electricity. In contemporary energy systems, electricity serves as an energy carrier. It is produced from primary energy sources using technology such as diesel powered generators or wind turbines. It is the same case with hydrogen. Hydrogen will be generated using energy from the Mawson station’s wind turbines, stored and used in a test fuel cell, as fuel in a heater and in one of the station vehicles. Two Enercon wind turbines, capable of withstanding blizzards in excess of 300 km/h, were recently installed. Together, the units provide one MW of electricity for use at the research station and for the hydrogen project — and dramatically lower the need for imported diesel fuel. “The Mawson system will generate well over ten times the power of existing Antarctic wind-power systems while having a much lower environmental impact than the current option of diesel fuel now used throughout Antarctica,” said Australia’s Environment Minister Robert Hill, regarding the wind turbine construction. “When the system is fully developed, an Antarctic station will, for the first time, be able to use a renewable source to meet virtually all its energy needs.” For the upcoming hydrogen demonstration project, the AAD plans to install the test fuel cell and heater at the field camp on Bechervaise Island. They will provide electricity and heat for the scientists involved in the penguin monitoring program. By the completion of the project, the staff at AAD expects to gain sufficient information to be able to model the large-scale use of hydrogen to supplement their energy requirements. Hydrogen used by the Bureau of Meteorology staff for daily weather balloon flights is currently generated on site. Electrolyzers, powered in part by wind energy, produce hydrogen from water. Any excess hydrogen produced will be stored and utilized for the project. The system will be installed and implemented during the 2005-06 season. The AAD expects that the use of hydrogen as a fuel will reduce the need for fossil fuels during those times when the wind energy is insufficient to power the station. The hydrogen will fuel either a large-scale fuel cell system or an internal combustion engine generator. The ultimate aim is to be able to run the station and all the field camps without the use of any fossil fuels. The AAD believes this may be the first attempt to use hydrogen as a major energy source in Antarctica. Information courtesy of the Australian Antarctic Division (AAD) Partially written by Annie Rushton with assistance from AAD Engineer Peter Magill