More
Home Wind Power Project Development How to Cut the Cost of Wind Energy in Half — A...

New energy science and technological breakthroughs could cut the cost of wind energy in half by 2030—making it fully competitive with the fuel cost of natural gas.

This new finding is outlined in a report by the National Renewable Energy Laboratory (NREL) that examines the future of wind power plants—backed by the supercomputing power of the U.S. Department of Energy’s (DOE) national laboratories.

It’s part of DOE’s Atmosphere to Electrons initiative, which focuses on maximizing efficiencies at the plant level (i.e., how wind turbines interact with one another and the atmosphere) rather than treating each wind turbine as an individual unit. The next step is for DOE to apply high-performance computing to this grand challenge of better understanding the complex physics that control electricity generation by wind plants.

The Wind Plant of the Future

According to NREL, the wind plant of the future will use a collection of technologies that allow wind power plants and the turbines within them to not only respond to the atmosphere as an efficient, integrated system, but also to control the airflow within the plant to maximize power production. This approach is made possible by recent advances in supercomputing technology, which turns large sets of atmospheric and wind turbine operation data into a high-fidelity model. Industry can then use these government-driven scientific insights to design new wind turbine components, sensors, and controls. Future wind power plants would include: 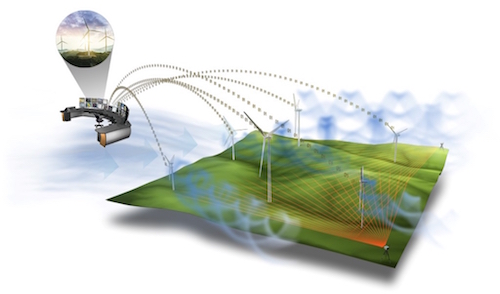 The rise of wind energy over the past decade has been driven largely by technological advances that have made wind turbines more efficient at a lower cost. Wind was the third most-installed source of U.S. energy capacity in 2016 behind solar and natural gas. Between 2009 and 2016, installed project costs for new wind farms dropped 33 percent, while also generating more electricity per turbine.

Continued cost reductions will become even more important as wind’s main policy incentive, the federal production tax credit, expires in 2019. By leveraging high-performance computing and accelerating energy science R&D efforts for the wind plant of the future, wind energy costs could be cut in half by 2030 or sooner, bringing it below the projected fuel cost for natural gas.

Newly-built wind plants using production tax credits are already cost-competitive with new natural gas plants in some parts of the U.S., especially in the “wind belt” that runs from Texas to North Dakota. New energy science and technology breakthroughs outlined above could drop the unsubsidized cost of wind energy below the projected cost of fuel for existing natural gas plants by 2030. 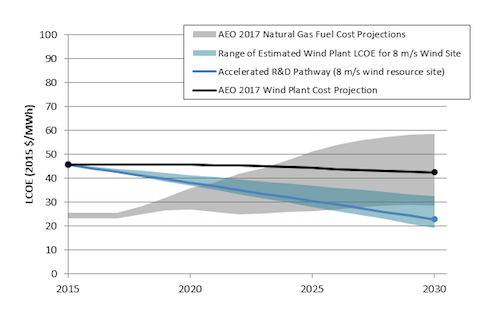 Levelized cost of energy is the total cost of installing and operating a project per megawatt-hour of electricity generated by the project over its life. AEO projections are from the Energy Information Administration’s Annual Energy Outlook.