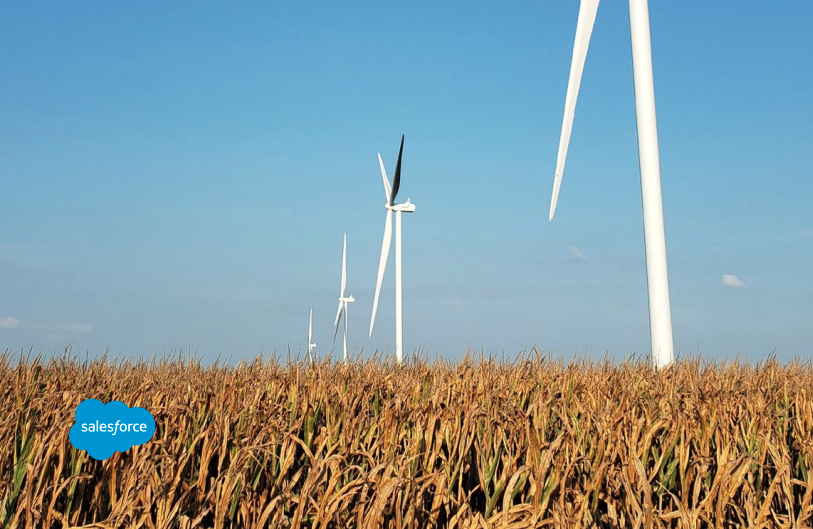 Back in late August, the Dow Jones Indices made major headlines with the news that long-time member ExxonMobil was being dropped to make room for software giant Salesforce. Many characterized it as a changing of the guard, with fossil fuels out and low-carbon-footprint companies in. It wasn’t the first time Salesforce found itself in a Dow Jones story. Two years ago, Salesforce was added to the prestigious Dow Jones Sustainability Index (DJSI) for the first time. Now, Salesforce is again stepping forward with sustainability leadership.

Toward the end of October, Salesforce released More Than A Megawatt, a new white paper that explains the evolution in the company’s strategy for large-scale renewable energy procurement. Our team at WattTime supported aspects of Salesforce’s strategy evolution. Instead of treating all projects equally from a social and environmental standpoint, Salesforce carefully assesses each project on a range of criteria, including avoided emissions that help meet climate targets as well as air quality improvements that translate into health benefits.

Not all renewable energy projects—whether wind, solar, or other—reduce the same amount of carbon emissions or other pollution, depending on where they are located. For example, building new solar capacity in regions where there’s still a lot of coal-fired generation in the grid mix does more to decarbonize our electricity system than adding solar where there’s already a surplus. That’s why WattTime partner Clearloop—co-founded by former Tennessee governor Phil Bredesen—is focused on building more solar projects in the South.

For the strategy articulated in Salesforce’s More Than A Megawatt, WattTime helped the software giant understand in detail how a renewable energy project reduces emissions by displacing other resources on the electric grid, such as dirty fossil-fueled power plants. The resource that is displaced depends on the mix of generation resources in that grid region. WattTime analysis shows that the difference in avoided emissions can vary by up to a factor of three across different renewable energy projects, depending on their location.

Here at WattTime, we calculate avoided emissions using data such as the expected generation profile for a project and the hourly marginal emissions rate of the grid region in which it’s located. Using this assessment approach, organizations can compare the avoided emissions and air quality improvements of different projects and select or prioritize projects with greater benefits. We call this practice emissionality, and consider it an enhancement to the now-common corporate practice of focusing on additionality (corporate investments that get new renewable capacity built and added to the grid).

This effect is even more amplified when considering the criteria pollutant reductions and health benefits of new renewable projects. Unlike CO2, which has a global effect no matter where it is emitted, pollutants that affect health — particulate matter, sulfur dioxide, nitrogen oxides — have a direct and concentrated impact on the health of the local community. Furthermore, certain fuels like coal and diesel harm health more than others. This means that if a new project reduces the generation from a fossil generator in a heavily populated area or an area with vulnerable populations, it will have significantly more health benefits than a project that reduces generation from a cleaner plant or a rural plant. Because the health benefits of new renewables are so unevenly distributed, organizations — from corporations to universities to community choice aggregators to municipalities — can considerably amplify their impact by carefully considering this criteria in their selection process.

This procurement approach demonstrates that organizations pursuing new renewable energy investment have an opportunity to significantly increase the environmental benefit of their projects. And while it’s far too early to call emissionalitymainstream, the practice is gaining momentum.

Last year, Boston University highlighted how it used an emissionality approach to ultimately select a wind farm in South Dakota — rather than something closer to home in the New England region — because the project yielded stronger emissions-reduction benefits in line with the university’s climate targets. Then there were this year’s announcements from Salesforce and Clearloop. Most recently, last month saw Nucor —t he largest steel producer in the United States — sign a massive power purchase agreement (PPA) for 250 MW of solar in Texas. Nucor chose the project in part based on its emissionality benefits.

In light of this, Salesforce is providing a window into its strategy and making it available to other organizations that want to maximize environmental and social benefit as well. The recent white paper, in tandem with selection matrix and sample RFP questions, arms organizations with the tools they need to scrutinize projects under consideration. It includes detailed discussions of the criteria as well as step-by-step instructions for getting the most value. This tool gives organizations the ability to better identify the projects that maximize environmental and social benefits and best meet their organizational priorities, whether that includes avoided emissions, health impacts, land use considerations, or local economic development.

Salesforce, WattTime, and others are also supporting the Renewable Energy Buyers Alliance (REBA) to further develop these criteria, identify additional criteria, and make the guide available to a wider audience. As mainstream discussions around climate action focus more and more on the urgency of a 1.5ºC pathway, all stakeholders in the renewable energy sector can leverage emissionality to achieve deeper, faster emissions reductions from new capacity.

Author Henry Richardson is a senior analyst at WattTime.